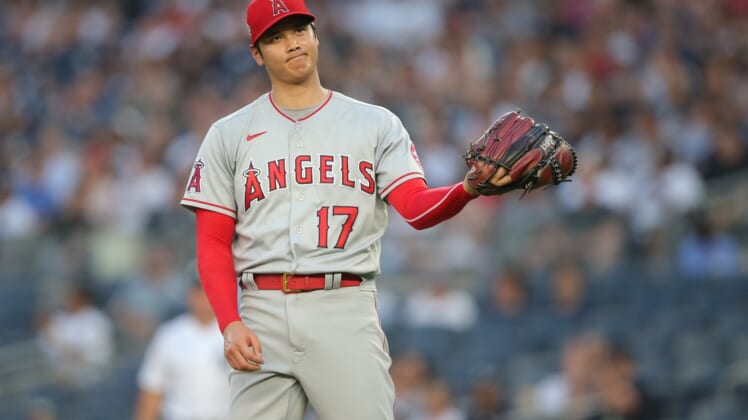 Jared Walsh hit a game-tying grand slam in the ninth inning against an erratic Aroldis Chapman, and pinch hitter Luis Rengifo added a two-run single later in the inning as the visiting Los Angeles Angels rallied to beat the New York Yankees 11-8 on Wednesday night.

After two rain delays totaling more than two hours, the Yankees took an 8-4 lead into the ninth, thanks mostly to scoring seven times in the first inning against Angels starter Shohei Ohtani.

Chapman issued three walks before Walsh hit a 1-1 slider into the New York bullpen beyond the right-center field fence. It was the first slam ever allowed by Chapman, who has an 11.43 ERA in his past 11 appearances. It was Walsh’s second homer of the night.

Rengifo gave the Angels a 10-8 lead when he lined a single to left off Lucas Luetge (2-1). Taylor Ward made it 11-8 with an RBI double down the left field line.

The Angels rallied nearly six hours after Ohtani allowed a career-high seven runs and got only two outs in his second-shortest career start.

Ohtani allowed two hits, walked four and got one strikeout while throwing only 20 of his 41 pitches for strikes.

Ohtani allowed walks to DJ LeMahieu, Luke Voit and Gary Sanchez to open the game. He then served up consecutive RBI singles to Giancarlo Stanton and Gleyber Torres that tied the game at 2-all.

Ohtani allowed an RBI groundout to Miguel Andujar that put the Yankees ahead. He loaded the bases a second time by hitting Clint Frazier on the hand and exited after issuing a bases-loaded walk to Brett Gardner.

After Ohtani exited, LeMahieu capped the seven-run inning with a bases-clearing double. Gardner hit an eighth-inning homer for the Yankees.

Phil Gosselin hit a two-run homer in the first inning, Juan Lagares hit an RBI double in the second and Walsh homered in the fifth for the Angels.

Seven relievers followed Ohtani and combined to pitch 8 1/3 innings of one-run ball. Mike Mayers (2-3) was credited with the win after the Angels came back, and Raisel Iglesias pitched a perfect ninth for his 15th save in 18 chances.