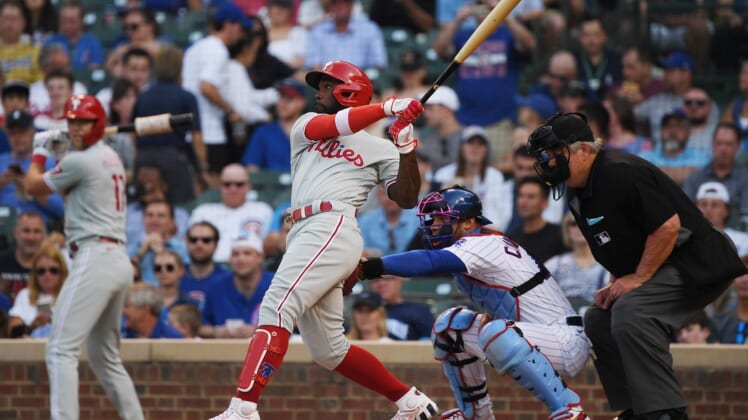 McCutchen connected against Cubs right-hander Jake Arrieta four batters into the game, and the Phillies reached their former teammate for three more runs in the second. Rhys Hoskins, who was 3-for-5 with four RBIs, punctuated that rally with a two-run double.

That hit chased Arrieta, who allowed seven runs on six hits in 1 2/3 innings, with two walks and four strikeouts. Arrieta (5-9) has yielded 10 earned runs in 3 1/3 innings over his past two starts. In eight starts since May 30, he has a 9.67 ERA while averaging fewer than four innings per appearance.

Philadelphia out-hit Chicago 16-14 while winning for the fourth time in five games. After rolling 13-3 on Monday to open a four-game series at Wrigley Field, the Phillies have scored 10-plus runs in successive games for the first time since June 22-23, 2015.

Aaron Nola improved to 6-5, scattering four runs and six hits in six innings while walking one and striking out eight. He has fanned at least eight batters in four of the past five starts.

Chicago hasn’t won since June 24, when four pitchers combined on a no-hitter against the host Los Angeles Dodgers. The Cubs have been outscored 83-35 during their longest skid since losing 12 straight in May 2012.

The Cubs scored three runs in the third to draw to within 7-3, but they came no closer. The Phillies responded with two runs in the fourth, then followed a Cubs tally in the sixth with a six-run outburst in the seventh. Hoskins hit a solo shot and Harper added a three-run blast in the inning.