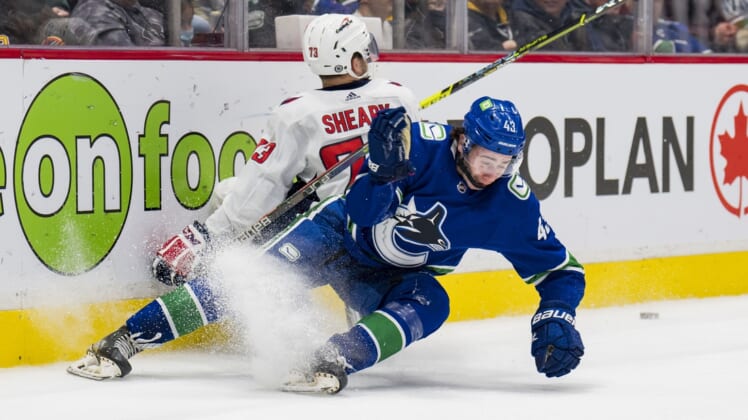 John Carlson entered the zone 2-on-1 and passed across to Eller, whose shot eluded Thatcher Demko.

Evgeny Kuznetsov had his second career hat trick for the Capitals, who went 2-0-1 on their Western Canada road swing. Vitek Vanecek made 23 saves.

Alex Ovechkin had two assists but did not score and remains tied with Jaromir Jagr (766 goals) for third place on the NHL all-time list.

Bo Horvat scored twice for the Canucks, who had won three straight. Quinn Hughes had a goal and two assists and Thatcher Demko made 30 saves.

Kuznetsov tied the score 3-3 when he tucked in a rebound at 15:07 of the third period on a power play.

Vancouver trailed 2-0 entering the third period, but Hughes pulled the Canucks within 2-1 just 57 seconds in when his high wrist shot from the center point found its way through traffic and past Vanecek.

Horvat tied it 2-2 on power play at 3:19, scoring from the high slot off a pass from Miller, and then gave the Canucks a 3-2 lead when he back-handed home a rebound at 4:59 for his 20th goal of the season.

The Capitals took a 1-0 lead at 5:43 of the first period thanks to a strange bounce. Nick Jensen played the puck around the boards in the offensive zone. The puck apparently hit something, deflected out in front of the net, and bounced off Kuznetsov and into the net.

Kuznetsov struck again 44 seconds later on the power play. Ovechkin’s one-timer trickled past Demko and Kuznetsov outreached a defender to sweep it over the line and make it 2-0. The puck was not already over the line when Kuznetsov hit it, or the goal would have been Ovechkin’s.

Kuznetsov has seven points (four goals, three assists) in his past five games.