Why the Washington Nationals made the right choice drafting Elijah Green with No. 5 pick

The Washington Nationals went into the 2022 MLB Draft unsure of what to expect, hoping an elite talent would slide to the fifth overall pick. That’s precisely what happened as Mike Rizzo, president of baseball operations, wasted no time drafting Elijah Green.

It was far from a guarantee the 6-foot-3 outfielder out of IMG Academy would make it to the Nationals. Both the Texas Rangers and Pittsburgh Pirates seemed like realistic landing spots for the toolsy right-handed hitter.

Instead, Texas shocked the baseball world by drafting pitcher Kumar Rocker with the No.3 pick. Thanks to the Rangers’ decision to save bonus pool money for later rounds, Washington just needed Pittsburgh to pass on the high-upside prospect.

The Pirates selected Termarr Johnson, paving the way for Rizzo to land a premium talent all the way down at No. 5 overall. Without wasting any time, Washingon turned its pick in and selected Green.

The pick came just after reports surfaced that Washington is exploring Juan Soto trade options. It means fans will almost certainly never see Green and Soto in the same lineup, a disappointment considering the exciting possibilities. However, fans should still be optimistic.

Druw Jones, picked second overall by the Arizona Diamondbacks, is the consensus No. 1 prospect from the 2022 MLB Draft class. If making rankings based purely on long-term upside, though, Washington might have its next superstar.

Rated by MLB Pipeline as the third-best prospect in the draft, Green’s physical tools are outstanding. The son of two-time NFL star Eric Green, Elijah received 70 grades for his raw power on the 20-80 scouting scale used in baseball. Putting that in perspective, that’s the ability to one day hit 40-plus homers in a season.

Naturally, Green’s profile does come with significant concerns that diminish his chances of reaching his ceiling. Evaluators have major concerns about the alarming lack of contact he makes. He struck out in 30% of his plate appearances, failing to put the ball in play more often than he ever showcased the power in live games.

However, Perfect Game USA noted that Green adjusted his swing late and managed to reduce his strikeout rate from 35% early in the season to 20% as his senior year at IMG Academy drew to a close. It’s that ability to make adjustments that inspires confidence he can become a better hitter.

Defensively, there are no real questions about Green’s game. If he doesn’t stick in center field, his combination of speed and arm strength could make him outstanding defensively in the corner outfield.

Even if Green never becomes an average hitter, reaching a peak of being a 50 on the 20-80 scale, his raw power is more than enough for a few 30-homer seasons. If the Washington Nationals can get even more out of him and his work ethic leads to successful adjustments, the Nationals will have a perennial All-Star outfielder. 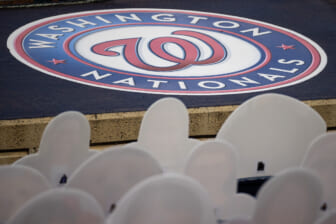