The Washington Nationals sit near the bottom of the MLB standings and the latest MLB trade rumors make it clear they will be sellers. While the major-league roster needs work, the Nationals’ farm system might be even a bigger work in progress.

Even after the blockbuster trade with the Los Angeles Dodgers in 2021, trading away Trea Turner and Max Scherzer, Washington’s future isn’t especially promising. While outfielder Juan Soto is one of the best players in baseball and there are no plans to move him, everything around him is a work in progress.

Evaluators weren’t especially high on the Nationals’ farm system heading into the season. Outside of right-handed pitcher Cade Cavalli and shortstop Brady House – the only top-100 prospects in the system – Washington lacked high-end talent.

Part of the organization’s issue is some of its top prospects failed to live up to expectations. Carter Kieboom 28th overall in the 2016 MLB Draft – dominated the minor leagues but never became a quality hitter in the majors and no longer profiles as an everyday player. Seth Romero – selected 25th overall in 2017 – is already 26 and struggled in DOuble-A (5.41 ERA) this season.

Related: Why Armando Cruz can become one of the Washington Nationals top prospects

Unsurprisingly, it is significantly impacting the perception of Washington’s long-term outlook and pool of young talent. In FanGraphs’ latest MLB farm system rankings, the Nationals ranked 23rd with only Cavalli earning a 55 ‘Future Value’ grade on the 20-80 scale.

There’s a possibility things could get even worse for the club. Cavalli and fellow pitching prospect Cole Henry are nearing their MLB debuts and could eclipse their prospect eligibility by early next season. Once that happens, the farm system will thin out even more.

How the Washington Nationals can improve their farm system?

There are two important opportunities for general manager Mike Rizzo to turn things around. First, he can strengthen the team through the 2022 MLB Draft. Washington holds the opportunity to land one of the top talents with the No. 5 pick, likely grabbing a bat who profiles as a slugger in the middle of the future Nationals’ lineup.

Rizzo will also hold the 45th and 84th overall picks at his disposal, allowing him to take advantage of a draft class that is relatively deep. Armed with the sixth-largest bonus pool allotment to spend on his picks, there is flexibility to snag high-upside players who might slide down into Round 2 and 3 over signability concerns.

Once the draft concludes, Rizzo can turn his attention to the MLB trade deadline. Josh Bell will net the biggest return, as one of the best slugging first basemen in MLB this season. As a half-season rental, though, the Nationals won’t land a top-50 prospect in return for him.

As a result, Rizzo will have to scour farm systems to find unheralded talent who could blossom in the Nationals’ organization. It also means trading Nelson Cruz, César Hernández, Steve Cishek, Carl Edwards Jr. and Victor Robles.

After that, Nationals will turn their attention toward international free agency and spend more money on young players with intriguing physical tools. If all goes well, Washington could climb up the MLB farm system rankings in 2023 and keep Soto. 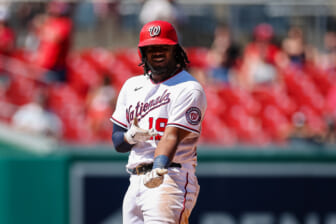