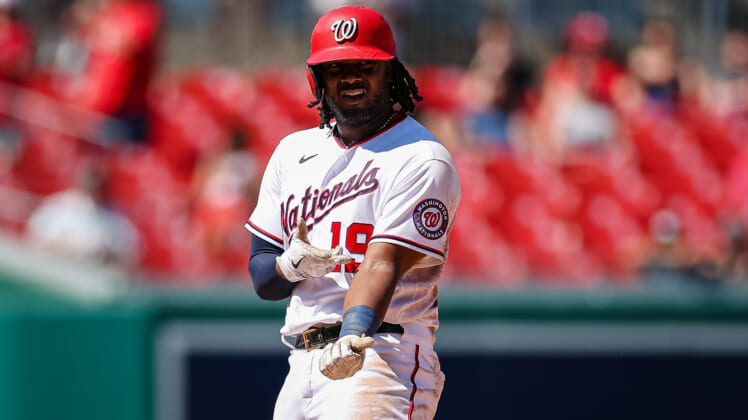 Washington Nationals first baseman Josh Bell is one of the best hitters available on the trade market this summer. As the Nationals prepare to tear down part of the roster, they should have plenty of suitors interested in Bell.

After a productive 2021 season at the plate in Washington, Bell is taking things to another level this year. The switch-hitter is both displaying his usual power and he’s now hitting for a career-high batting average, emerging as one of the best first basemen in MLB.

It comes at a time when the Nationals are showing zero signs of being competitive in the near future. Stuck with a lineup that is often futile outside of Juan Soto, Washington seems poised to ship off Bell before the Aug. 2 trade deadline.

While first base isn’t the most coveted position among MLB contenders, let’s take a look at three potential Josh Bell trade landing spots and gauge what the Nationals could receive back in a deal.

Contracts obviously play a huge part in trade negotiations. Bell is in the last year of his deal and while the remaining portion of his $10 million salary is easy for the Houston Astros to absorb, they also won’t part with a top prospect for two months of Bell. 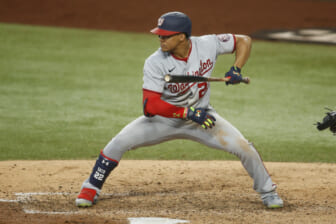 The headliner in this deal heading back to the Nationals is Alex Santos. The 20-year-old is a top-10 prospect in Houston’s system, receiving future grades for three ‘plus’ pitches (fastball, curveball, changeup). While he’s struggling this year in A-ball (5.43 ERA), the ability to miss bats (28% K-rate) and command his pitches (18.9% K-BB) suggest there is potential to become a mid-rotation starter.

Tyler Ivey could make starts in the Nationals’ rotation in August and September, used as a trial run to determine if he’s a starter or reliever long-term. Meanwhile, Whitcomb profiles as a utility infielder who could make an MLB debut in 2023.

A year ago, the Washington Nationals traded Kyle Schwarber to the Boston Red Sox when they needed a big bat. Fast forward to 2022, Boston’s first basemen enter early July with a collective .633 OPS and a .218/.293/.340 slash line.

This return asks Washington to assume a lot more risk. Jay Groome, the 2016 first-round pick, hasn’t come close to matching the hype out of high school. Injuries, including Tommy John surgery, played a part in that. He sports a 3.69 ERA in his second stint at the Double-A level this year, but walks (12.3% BB rate) are a bit of an issue.

Noah Song is the biggest gamble. Many viewed him as a first-round talent in the 2019 MLB Draft, but he slipped to Round 4 due to his military commitment. He completed flight school and petitioned to begin his baseball career, but it’s radio silence since. If he was ever cleared to play baseball again, he could become one of the Nationals’ top prospects.

The Milwaukee Brewers approach the MLB trade deadline with limitations, often unable to pursue a marquee name. Thanks to Bell’s asking price in a trade being driven down by his half-season contract, he could fit nicely into Milwaukee’s price range.

In exchange for landing a pair of Milwaukee’s top-12 prospects, Washington includes $1.5 million cash to cover a portion of Bell’s contract. It also addresses two positions where an organization can never have enough depth and young talent.

Kelly, a 22-year-old southpaw, is likely a few seasons away from a potential MLB debut. However, the 5-foot-5 lefty is flashing an electric fastball-slider combo this year that is responsible for striking out 31.4% of batters faced with an incredibly .169 batting average allowed across 15 starts.

As for Joe Gray Jr, he serves as a lottery ticket for the Nationals. There is some enticing power (10 home runs) and speed (11 steals) to work with, but he rarely makes contact (.177/.277/.338 slash line) and the 22-year-old strikes out at an alarming rate (35.2%). This is an upside play, one worth taking when you deal a half-season rental away before he leaves in free agency.