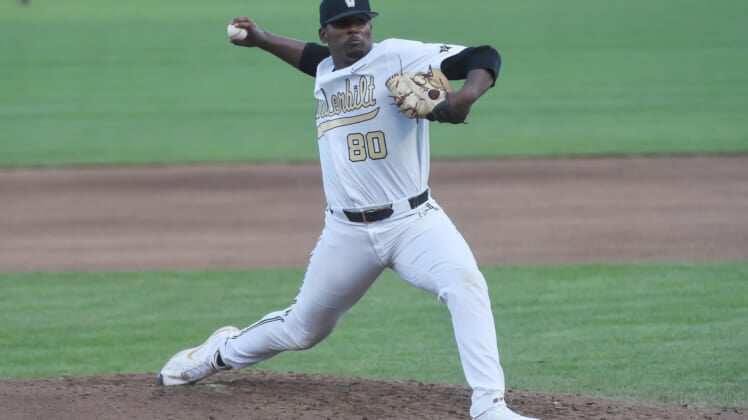 The Texas Rangers shocked everyone early in the 2022 MLB Draft, selecting pitcher Kumar Rocker from Vanderbilt.

Rocker was the No. 10 pick of the New York Mets in the 2021 MLB Draft. But he couldn’t agree to terms with the team. Instead, the potentially dominating pitcher entered the 2022 event.

How surprising was this pick? We had Rocker going No. 17 overall to the Philadelphia Phillies in our final MLB mock draft. He ultimately went after No. 1 pick Jackson Holliday (Baltimore Orioles) and No. 2 selection Druw Jones (Arizona Diamondbacks).

Why the Texas Rangers selecting Kumar Rocker is so shocking

Rocker was not signed by the Mets last summer because of continued concerns about his throwing shoulder. Ultimately, Rocker opted to play in the independent league with the Tri-City ValleyCats, where he dominated.

Despite this, it is shocking that the Rangers would use the third overall selection on Rocker. He went ahead of more-notable prospects such as shortstop Brooks Lee, third baseman Cam Collier and catcher Kevin Parada.