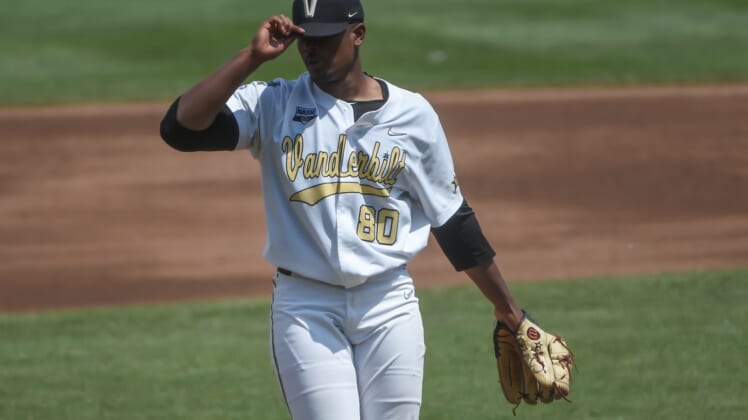 Kumar Rocker, the No. 10 pick in the 2021 MLB Draft, is not expected to be signed by the New York Mets after the two sides reportedly couldn’t agree on a contract.

Considered one of the elite prospects in the MLB Amateur Draft, Rocker fell to the Mets due to teams with top-10 picks preferring to sign cheaper players. As a result, the Vanderbilt Commodores star became available and the Mets quickly selected him on draft night.

Now, days after the New York Post‘s Kevin Davidoff reported contract talks slowed over a medical issue the team saw in his elbow, the Mets are prepared to lose the talented righty.

According to ESPN’s Jeff Passan, New York doesn’t expect to reach an agreement with Rocker by the 5 p.m. EST signing deadline on Friday. After initially having an agreement in place on a $6 million contract, well above the $4.74 million slot for the 10th pick, the Mets are backing out.

Viewed as the consensus top prospect in the 2021 draft class before the collegiate season, Rocker’s velocity fluctuated this year. As detailed by FanGraphs’ Kevin Goldstein, Vanderbilt’s ace would touch 99 mph in some starts and average around 96 mph. But later in the season, his fastball peaked at 94 and he couldn’t consistently average 92 mph.

While MLB clubs were concerned about the fluctuating velocity, Rocker’s overall repertoire and skills still made him an elite talent. Shortly after being drafted by the Mets, billboards with Rocker on them appeared in New York City.

What happens if the Mets don’t sign Kumar Rocker?

Rocker is allowed to return to Vanderbilt, exercising his final season of eligibility and can redeclare for the 2022 MLB Draft. As for the Mets, under MLB rules, they will receive the No. 11 pick in next year’s draft.

However, the Mets will face significant questions for the process that led to this result. New York had a $9 million pool to spend in the first 10 rounds of the MLB Amateur Draft. Ordinarily, when teams draft a player who they know will sign above slot, they spend later picks on prospects who will sign below slot.

But the Mets made a crucial mistake during the draft process. After drafting Rocker, they never created a backup plan in the event a contract couldn’t be reached. Most MLB clubs will take a player after Round 10, usually a high school prospect, who they could move money towards if the top pick doesn’t sign.

The Mets didn’t take that approach, leaving $6 million for Rocker and never having a fallback plan. As a result, they lose a gifted pitcher and won’t recoup the money they didn’t spend.

For a front office that is already facing criticism for its approach to the trade deadline, there is now even more scrutiny.