Warriors winning 2019 NBA title would be their most impressive ever 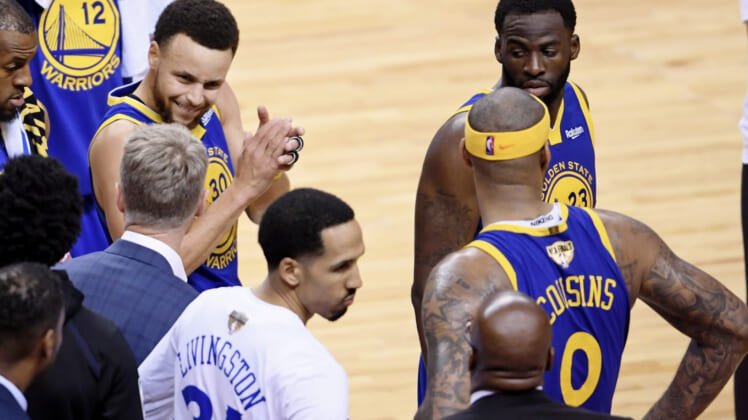 There has been this narrative thrown around that somehow the Golden State Warriors have been the benefactors of good luck when it comes to health.

They have certainly faced teams in recent years that were not at full strength.

Those are some major injuries. But it should also be noted that Golden State was not anywhere near 100% as it blew a 3-1 series lead against the Cleveland Cavaliers in the 2016 NBA Finals.

Narratives are normally a one-way street. They attempt to fit a point some are looking to make (objective or not).

This postseason has been much different. The Warriors have faced pretty much healthy squads throughout.

Though, their injuries have now come front and center.

The Warriors’ run of good luck has obviously subsided. Whether that narrative was even factual in the first place remains to be seen.

But what we do know is that if Golden State were to win a third consecutive title and fourth in five seasons, it would be their most impressive yet.

These injuries come at a time when the Warriors’ depth was already in question. Throwing out the likes of Quinn Cook, Jonas Jerebko, Andrew Bogut and Alfonzo McKinnie in crunch time during the NBA Finals is a less-than-ideal scenario.

Despite this, the Warriors are coming off what might have been their most impressive win of the Steve Kerr era.

With Thompson and Durant out of action down the stretch, Toronto went with a “janky” defense, as Stephen Curry put it. Said defense is called a box and one, something that’s normally limited for the high school game.

Curry did not score in the fourth quarter. In fact, Cook was the Warriors’ leading scorer in the second half with nine points. He was the catalyst for a 19-0 run in the third quarter that put this game away.

Golden State’s status as a “strength in numbers” team was truly questioned after Durant signed with the squad. But it has taken on a whole new meaning during this current run for a three-peat.

This is the definition of strength in numbers. And if the Warriors were to defeat Toronto for a third consecutive title, it would be their most impressive ever.