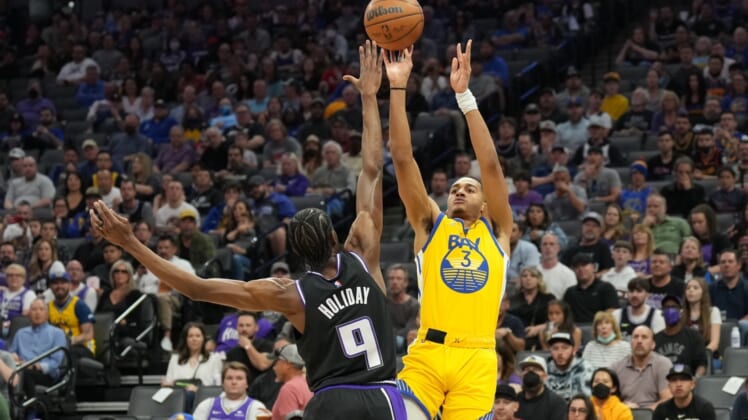 Andrew Wiggins scored a game-high 25 points and the Golden State Warriors retained the No. 3 playoff position in the Western Conference with a 109-90 victory Sunday night that formally eliminated the host Sacramento Kings from postseason contention.

Electing to rest veterans Klay Thompson, Andre Iguodala and Otto Porter II on the second night of a back-to-back, Golden State (50-29) also got 22 points from Jordan Poole, 19 from Nemanja Bjelica and 17 from Jonathan Kuminga in winning a second straight.

Playing after their two chief challengers for the West’s third seed – and Dallas Mavericks (49-30) and Denver Nuggets (47-32) – had already won, the Warriors used the victory to retain a one-game advantage with three games remaining.

Former Warriors Harrison Barnes and Damian Jones had 18 and 17 points, respectively, to pace Sacramento (29-50), which needed to win its last four games to have a shot at ending what is now a 16-year playoff drought.

One night after needing a furious fourth-quarter rally at home to stave off the Utah Jazz, the Warriors bolted to a 28-12 lead in the final minute of the first quarter and never looked back.

But Gary Payton II countered with a layup and Wiggins buried his fourth 3-pointer of the game, re-establishing a double-digit lead that allowed for a comfortable finish as Golden State completed a 4-0 season-series sweep.

Wiggins was 4-of-7 in three-point attempts, while Poole went 4-for-9 and Bjelica 3-for-6, helping Golden State run up a 48-21 advantage in points from beyond the arc.

Bjelica grabbed a game-high 12 rebounds to complete a double-double while also totaling a team-high six assists off the bench for the Warriors, who had lost four games in a row before Saturday’s dramatic win.

Donte DiVincenzo chipped in with 14 points off the bench for the Kings, who were coming off a 4-1 trip that ended with a pair of wins at Houston.

Barnes completed a double-double with a team-high 10 rebounds, while Davion Mitchell logged a game-high nine assists to go with nine points.