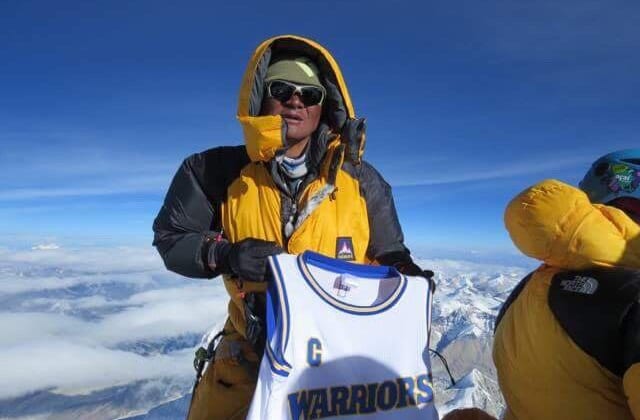 A Golden State Warriors fan has high hopes for his favorite team. So high, in fact, that he took his Stephen Curry jersey to the highest point on Earth.

Nima Tenji Sherpa, who says he’s climbed to the top of Mt. Everest seven times now, posted some extraordinary pictures of himself holding a Curry jersey at the top of the world.

Thi is photo at Camp 4 clicked while returning back from the summit #GSWarriors #curry #warriors #StephenCurry #nbaplayoffs #nba #NBA2K17 pic.twitter.com/a5TFsAioPb

This mountaineer also has a shop he keeps in Kathmandu and is a mountain guide, per his Facebook page. His Twitter profile also says he has four years left on his American visa.

After trekking to the top of the world, maybe this sherpa’s next trek could involve a trip to Oracle Arena to see the Warriors take on the Cleveland Cavaliers in the 2017 NBA Finals.