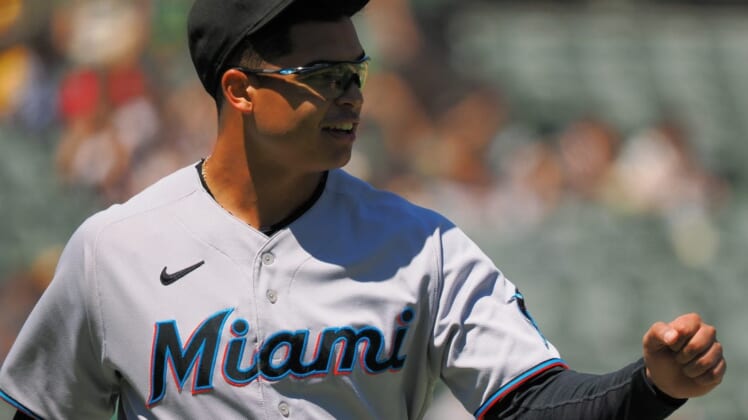 Automatic runner David MacKinnon raced home from third on Skye Bolt’s shallow sacrifice fly to right-center field in the bottom of the 10th inning Wednesday afternoon to give the Oakland Athletics a 3-2, walk-off win over the visiting Miami Marlins.

After A’s reliever A.J. Puk (3-1) stranded two Marlins in the top of the 10th, MacKinnon, placed at second to start the bottom of the inning, advanced to third on a wild pitch by Richard Bleier (2-2) before sliding home safely when Bolt lifted his game-ending fly ball.

The walk-off win was Oakland’s fourth of the season. Seeking a three-game series sweep and a third straight win for the first time since a six-game run bridging June and July, the Marlins suffered their eighth walk-off defeat.

A’s starter Cole Irvin was two outs away from being rewarded a win for a career-best, 11-strikeout performance when the Marlins’ Nick Fortes drilled a one-out homer in the top of the ninth off Oakland closer Dany Jimenez to draw the Marlins even at 2-2.

The homer was Fortes’ seventh of the season.

Miami had also scored in the eighth, getting within a run on a two-out single by Miguel Rojas off the second Oakland pitcher, Zach Jackson.

Facing the A’s for the first time since they dealt him to the Marlins last July, Miami starter Jesus Luzardo matched zeroes with Irvin until Jonah Bride singled to left field for Oakland’s first hit leading off the sixth.

A one-out single by Nick Allen and two-out walk to Sean Murphy set up a two-run single by Chad Pinder that produced the game’s first runs.

Luzardo went on to complete seven innings, giving up just the two runs and three hits. He walked two and struck out four.

Irvin was pulled after seven shutout innings. He allowed three hits — all singles — and did not issue a walk.

Fortes was the only player in the game with multiple hits, supplementing his home run with a single. His homer was the only extra-base hit among just nine hits in the game, five of which were by the Marlins.