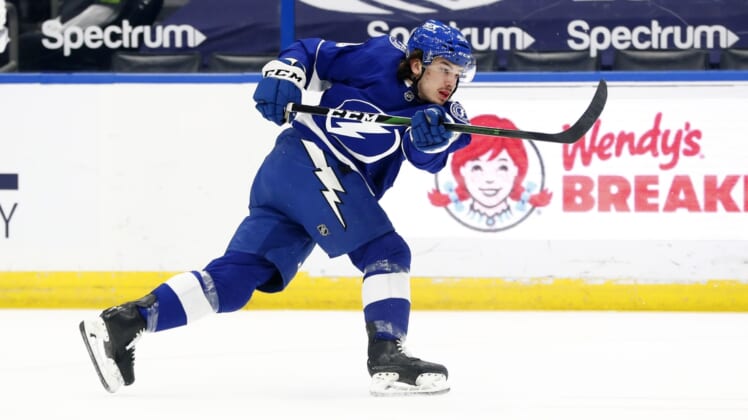 Victor Hedman scored 54 seconds into overtime as the host Tampa Bay Lightning beat the Florida Panthers 3-2 at Amalie Arena in a battle of two of the top teams in the NHL’s Central Division.

The Lightning has won three of the five meetings between the two teams so far this season. Game No. 6 is Saturday in Tampa.

Florida took the first lead in a first period in which it outshot the Lightning 13-4.

Patric Hornqvist gave the Panthers a 1-0 lead at 15:13 off a pass from Alex Wennberg.

Tampa Bay found itself in the second period and got a power play goal to tie the score at 1 when Alex Killorn and Anthony Cirelli broke out on a 2-on-0 charge.

Killorn’s pass was clipped by Florida defenseman MacKenzie Weegar and went past Driedger.

Killorn was the last Tampa Bay player to touch the puck and was credited with the goal. Vasilevskiy started the play with a long pass and picked up his third assist of the season.

In the third period, the Panthers retook the lead on a one-timer from Anthony Duclair coming off a pretty pass from Jonathan Huberdeau at 7:13.

Tampa Bay tied the score at the midway point as Ross Colton tapped in a Mikhail Sergachev pass that went off of Driedger’s pad and through.

The Panthers had three of their new players in the lineup for the first time with Nikita Gusev starting on the top line.