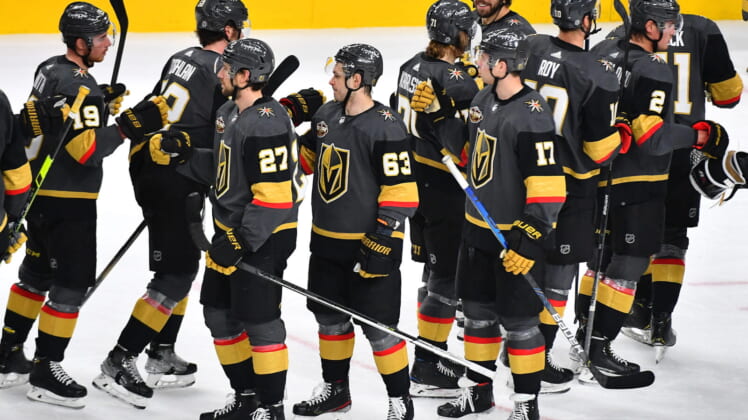 Robin Lehner returned to the Vegas Golden Knights’ crease and helped his team easily beat the New York Rangers in a 5-1 victory at home. Mark Stone also made his first appearance back from injury and made an immediate impact for the Golden Knights. The other goalscorers for the home team include Brett Howden, Mattias Janmark, and Jonathan Marchessault who had two.

This game helped the Golden Knights get back to their winning ways as they snapped a two-game losing streak. They didn’t get much pushback from the Rangers and easily grabbed the two points that were at stake. Both Stone and Lehner had really solid games in their return and showed little to no signs of rust.

This game marked the return of Ryan Reaves to T-Mobile Arena. Reaves played on the Golden Knights for four seasons and tormented his opponents with his physical play. Tonight also marked a return for Gerard Gallant who coached the Golden Knights. Both individuals received video tributes on the big screen.

“I’ll be honest, it kind of got to me a little bit,” said Reaves after the game, “I was a little flustered for the rest of the game.”

Thursday night was a strong all-around performance from a Golden Knights team that needed one to get back on track. They only have two more games until a small break because of a postponed trip to Canada, but will get a good test on Tuesday against the Toronto Maple Leafs.

The Vegas Golden Knights played a strong defensive game on Thursday, limiting the Rangers to just one goal. The one goal that did count, scored by Chris Kreider, was a soft one that Lehner wishes he could’ve had back, though understandable considering the rust that he’s shaking off.

Besides that one goal, the Golden Knights played a really structured game against a team that has plenty of talented players. Their strong defense allowed them to quickly move the puck up ice and was crucial to their success tonight.

The Golden Knights allowed under two expected goals against for the entire game and Lehner took the reins from there. They are still missing defensemen Nicolas Hague and Alec Martinez and tonight’s performance was even more impressive because of their absence.

The Rangers iced a defensive pairing of Libor Hajek and Zac Jones. The two were so clearly overmatched the entire night as the Golden Knights dominated play to a ridiculous degree while they were on the ice. Just look at the stats that the pairing had after 40 minutes.

The Vegas Golden Knights have been on a rocket ship up the standings and now stand alone at the top of the Western Conference. Many of the moved that they made over the offseason have been showing impressive early returns such as their goaltending standing strong despite the absence of Marc-Andre Fleury.

There’s no doubt that the organization feels as if they missed a huge opportunity to make the Stanley Cup Finals against a Montreal Canadiens team that now sits at the bottom of the standings. If the early part of this season is any indication, they will be back in the same situation.

The big question mark that hangs over the Golden Knights is how they will handle the return of Jack Eichel as it will likely result in the departure of a pair of Reilly Smith, Evgenii Dadonov, or William Karlsson.

The Golden Knights play their next game on Saturday against the Chicago Blackhawks. The puck drops for that game at 7 PM Pacific Time.