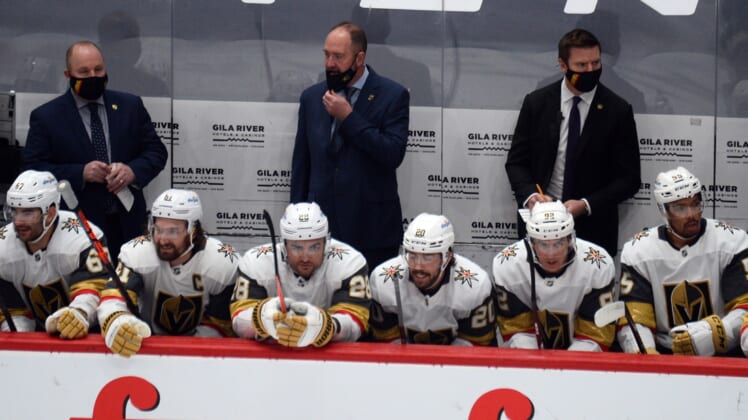 The Vegas Golden Knights find themselves in an unfamiliar position heading into their sixth game of the season on Sunday afternoon against the Arizona Coyotes in Glendale, Ariz.

For the first time this season, the Golden Knights will enter the game following a loss. Vegas set a franchise record with a 4-0-0 start to the campaign before dropping a 5-2 decision to Arizona on Friday night in its first road contest of the season.

Sunday’s game will end a stretch of four consecutive games between the two teams, an NHL regular-season record.

“This is a tough league to win in,” Golden Knights coach Peter DeBoer said. “It’s tough enough to beat anyone twice in a row never mind three times in a row. So we knew they were going to be good. I think it was self-inflicted things (on Friday).”

The game was tied at 1 after defenseman Shea Theodore scored his third goal in two games at the 1:19 mark of the second period. But Arizona responded with consecutive goals by Derick Brassard, Nick Schmaltz and Conor Garland. Garland also had two assists in the contest for the third three-point game of his career.

Vegas cut it to 4-2 midway through the third period on a goal by Cody Glass before Arizona sealed the victory with an empty-net tally by Jordan Oesterle with 59 seconds to go. It marked the first time this season that the Golden Knights allowed more than two goals in a game.

“Obviously, we’re not happy but they’re a good team over there,” Vegas goaltender Robin Lehner said. “They played well (on Friday). We need a strong effort and bounce back.”

“I felt like they played a great defensive game and we didn’t execute well,” Theodore added. “I think we can be a lot better defensively, especially in transition, and they just took it to us (on Friday).”

The victory gave Arizona five of a possible six points in games played at Gila River Arena this season. The Coyotes opened the season with a back-to-back against San Jose, losing a 4-3 decision in a shootout on Jan. 14 before posting a 5-3 victory two nights later. Arizona then dropped 4-2 and 5-2 results to the Golden Knights in Las Vegas.

“It kind of felt like a must-win,” Garland said. “They’re obviously a good team. We liked our effort there the first game and not so much the second game. It was a good response from us tonight.”

Christian Dvorak and Schmaltz each added a goal and an assist, Drake Caggiula had two assists and Darcy Kuemper stopped 29 of 31 shots for Arizona.

“I honestly didn’t think we played that badly in Vegas,” Coyotes coach Rick Tocchet said. “They just had bigger moments than us when the game was on the line.

“It was just outwork them and I think we did it for the most part,” Dvorak said. “We needed a full 60 minutes against this team and we did that. Hopefully we can even the series up here on Sunday.”