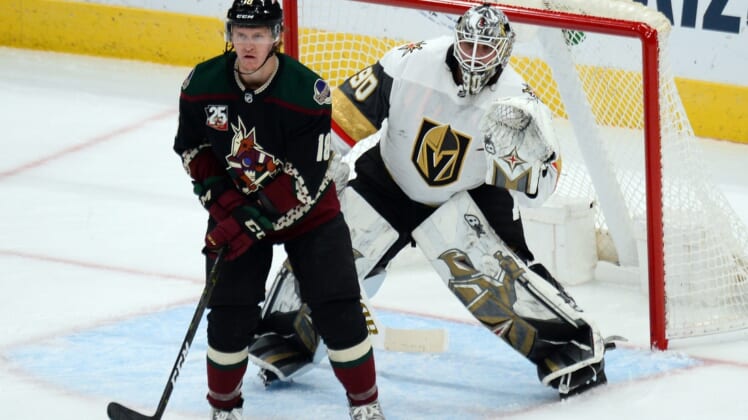 Conor Garland had a goal and two assists and Darcy Kuemper finished with 29 saves as the Arizona Coyotes handed the Vegas Golden Knights their first loss of the season, 5-2 on Friday night in Glendale, Ariz.

It was the third three-plus-point game of Garland’s career. Christian Dvorak and Nick Schmaltz each had a goal and assist while Derick Brassard and Jordan Oesterle also scored goals for Arizona, which snapped a two-game losing streak. Drake Caggiula added two assists.

Shea Theodore had a goal and an assist and Cody Glass also scored a goal for Vegas, which had won a franchise-record four games in a row to begin the season. Robin Lehner made 21 saves while taking his first loss in six regular-season starts with the Golden Knights.

Arizona, outscored 9-4 in back-to-back losses to the Golden Knights in Las Vegas earlier this week, took a 1-0 lead at the 3:22 mark of the first period on a power-play goal by Dvorak. He put in a rebound of a Garland shot that deflected off Lehner’s blocker and into the left corner of the net.

Vegas tied it early in the second period when Theodore intercepted Garland’s clearing pass along the right half-wall, then walked in and fired a wrist shot into the far top corner for his third goal in two games.

Arizona answered with two goals in the span of 4:05 to take a 3-1 lead after two periods. Brassard got the first, taking a stretch pass from Tyler Pitlick during a Vegas line change and blasting a slap shot from the top of the left circle past Lehner’s stick side.

Schmaltz, left alone on the right side of the net, converted Garland’s crossing pass, putting the puck into the top right corner of the net. It was his third straight game with a goal.

Garland made it 4-1 at the 1:25 mark of the third period with his second goal of the season, backhanding a Caggiula feed into the slot through Lehner’s pads.

The Golden Knights cut it to 4-2 with 8:56 remaining when Glass scored a power-play goal near the end of a double-minor on Jason Demers for high-sticking William Carrier.

Lehner was pulled with 1:11 to go and Oesterle sealed the win with an empty-net goal 12 seconds later.