Vanderbilt stuns No. 24 Kentucky in last minute of play 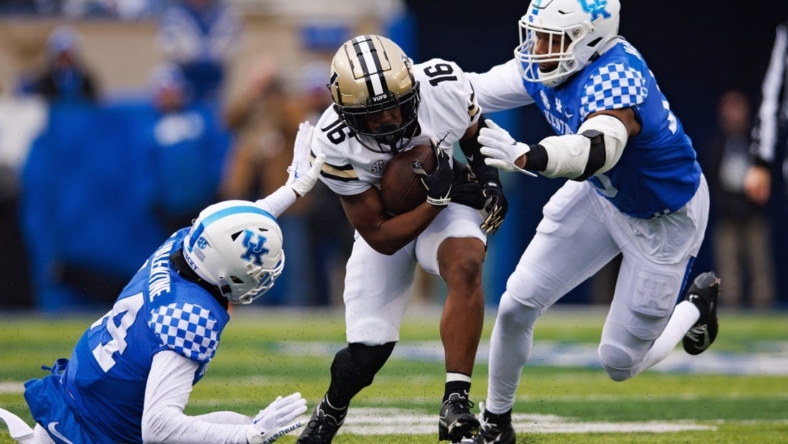 The key was a 4th-and-11 pass of 40 yards to Quincy Skinner Jr. to the Kentucky 8, setting up the game-winning score three plays later.

The win was Vanderbilt’s first in the SEC since a 21-14 victory over Missouri on Oct. 19, 2019 — the third-longest losing streak in conference history.

A 17-point favorite, the Wildcats were led by Rodriguez’s game-high 162 yards on 18 rushes with two TDs. Will Levis went 11-for-23 for 109 yards with an interception.

Kentucky got good field position when defensive back Carrington Valentine recovered a fumble on the game’s second play and returned it 21 yards. That set up Matt Ruffolo’s 47-yard field goal for a 3-0 lead.

But on an RPO play on the ensuing possession, Wright dashed 59 yards for his fifth TD. Yet Kentucky responded with a 15-play drive that took 8:21 off the clock, getting a second Ruffolo field goal — a 27-yarder — to tighten it to 7-6.

The Wildcats’ defense thwarted a drive when Keidron Smith intercepted a Wright pass at the goal line. Kentucky drove 61 yards in 10 plays, but Ruffolo’s 37-yard attempt for its second lead was blocked by Nate Clifton.

On Vanderbilt’s first series of the second half, Davis capped a 10-play, 81-yard drive with a 1-yard plunge at 7:47 for a 14-6 lead. His 45-yard run set up the score, but Ruffolo trimmed it to five with a 39-yard kick on the next possession.

In the fourth quarter, Rodriguez keyed a 66-yard drive and ended it with a 5-yard run. Vanderbilt’s Joseph Bulovas then kicked a 26-yard field goal for a 17-15 lead.