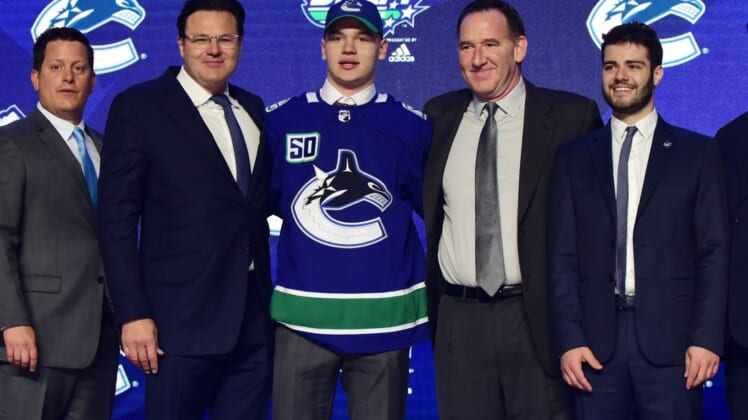 Jun 21, 2019; Vancouver, BC, Canada; Vasily Podkolzin poses for a photo after being selected as the number ten overall pick to the Vancouver Canucks in the first round of the 2019 NHL Draft at Rogers Arena. Mandatory Credit: Anne-Marie Sorvin-USA TODAY Sports

The 19-year-old forward from Russia was the No. 10 overall selection in the 2019 draft.

“Vasily is a competitor who plays an aggressive game,” Canucks general manager Jim Benning said in a news release. “He’s effective using his size and skill to get to the net and produce offensively. We’re pleased to sign him today and look forward to adding him to our young core of skilled players.”

Internationally, Podkolzin represented Russia at the last three IIHF World Junior Championships (2019-21) and had 12 points (three goals, nine assists) in 21 games. The team won bronze in 2019 and silver in 2020.