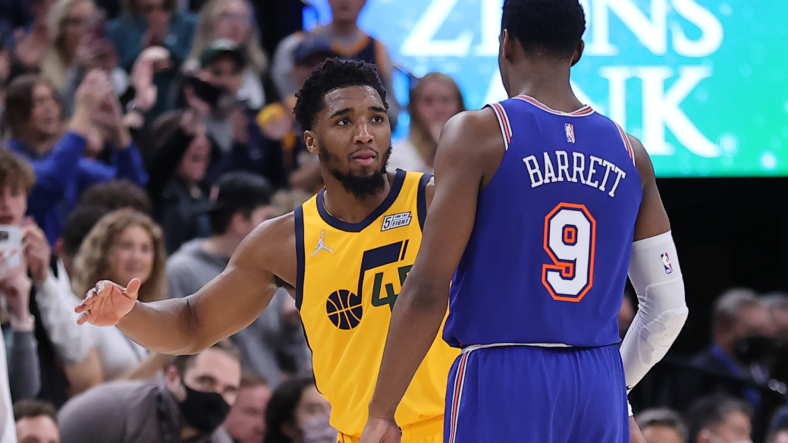 As soon as the Utah Jazz pulled the trigger on a Rudy Gobert trade, they essentially hit the rebuild button. A Donovan Mitchell trade was put in motion way back on July 1, even if the organization’s been pondering their next move ever since.

Yet we might have our answer on an expected Mitchell trade timeline. ESPN’s Brian Windhorst recently shared that the Jazz would like to move Mitchell before their training camp begins.

The official start date has yet to be unveiled, but their first preseason game takes place on Oct. 2, meaning their practices likely begin sometime in September.

While other teams such as the Brooklyn Nets, Cleveland Cavaliers, Miami Heat, and several others have been interested in Donovan Mitchell, it appears the New York Knicks continue to be frontrunners to land the talented scorer.

Meanwhile, Tony Jones of The Athletic reported last week that the Jazz have multiple offers they prefer over what the Knicks are presenting.

As SNY’s Ian Begley notes, the Cavs have dropped out of the competition and goes as far as to say, “Mitchell is New York’s to lose” at this point.

Marc Berman of the New York Post revealed on Thursday that the Knicks and the Jazz were close to a deal, with unprotected picks being the only sticking point. That package involved Obi Toppin, Evan Fournier, and a total of five first-round picks, with Jazz president Danny Ainge seeking four of the five to be unprotected instead of just two as the Knicks were offering. The Jazz don’t seem as concerned with the players in the deal as much as the picks.

Yet, with the current state of their roster, the Jazz have no reason not to trade Mitchell after sending Gobert away. Expect a deal to get done sooner than later.

All the stars seem to be pointing to Mitchell landing in the Big Apple. If so, they’d be adding a true face of the franchise, one Knicks fans haven’t seen in the Garden since Carmelo Anthony led the NBA in scoring in the 2012-13 season. If they can swing a deal, would it really matter how many draft picks are sent away?