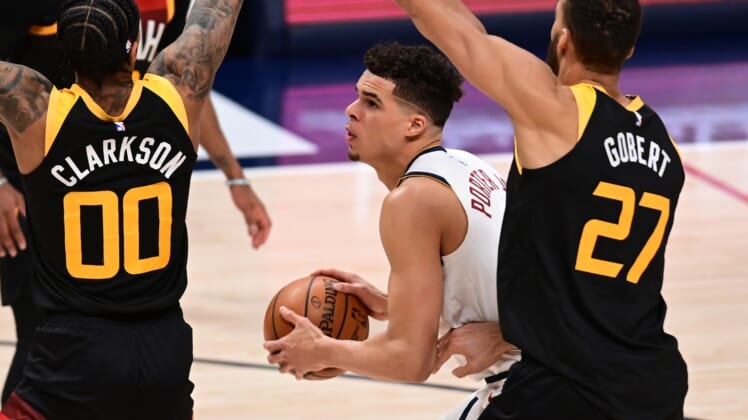 The NBA’s longest winning streak of the season ended Sunday, but the Utah Jazz might have to wait longer than scheduled to get back in the victory column.

The Jazz’s game Tuesday night in Salt Lake City against Detroit might not be played after the Pistons’ scheduled Monday contest at Denver was postponed just before tipoff in accordance to the league’s health and safety protocols.

ESPN reported that a Detroit player tested positive/inconclusive for COVID-19, leaving the team without the required minimum of eight players.

As of late Monday night, the Tuesday game between the Jazz and Pistons was still on the NBA’s slate.

Utah is due to host Atlanta on Thursday while Detroit is scheduled to finish its Western Conference trip in Phoenix on Friday and at the Los Angeles Lakers on Saturday. The Pistons’ road swing began Saturday with a 118-91 loss at Golden State, Detroit’s sixth defeat in eight games.

The Jazz lost Sunday for the first time since falling at New York on Jan. 6, a span that included 11 consecutive wins. That streak, which saw the Jazz beat 10 opponents by double digits, led to Jazz coach Quin Snyder being named the NBA’s Western Conference coach of the month for the December/January period. Snyder moved past Frank Layden into second place behind Jerry Sloan for wins in Jazz history.

Utah likely will need a better defensive effort than it gave Sunday in the 128-117 loss at Denver to start a new winning streak. The most glaring stat from the defeat: The Nuggets hit 15 of 17 3-point attempts in the first half while jumping out to a 79-54 halftime lead.

Nikola Jokic led Denver with a whopping 47 points against the porous Utah defense.

“We didn’t play our best, that’s what hurts, especially the way we played the last two games against Dallas,” said Jazz guard Donovan Mitchell, who was back in action after missing two games while in concussion protocol. “To have that performance and they come out and they shoot 15 of 17, that’s what hurts the most.”

The Nuggets gave the Jazz some of the medicine they had been doling out for the previous 3 1/2 weeks, going up by as many 28 points before Utah narrowed the gap. Ultimately, the Jazz didn’t have enough to overcome the large deficit, and the team’s longest winning streak since 2009 came to an end.

“We cross matched, we played zone, we doubled, we played man,” Snyder said. “But ultimately I think regardless of what you do, we have to play with more of an edge and more urgency.”

If Tuesday’s game happens as scheduled, the Jazz would increase the number of fans allowed in the arena from 1,500 to 3,902, according to the Deseret News.

The Pistons have now had two games postponed this season, including a Jan. 13 home game against the Washington Wizards, who had a lengthy COVID-related shutdown.

“You have to be nimble, you have to be flexible and you have to expect the unexpected,” Pistons coach Dwane Casey said recently. “And that’s how this entire season is going to go, and if you go into it thinking it’s going to be a normal day, that’s when your life will be a little bit disrupted.”