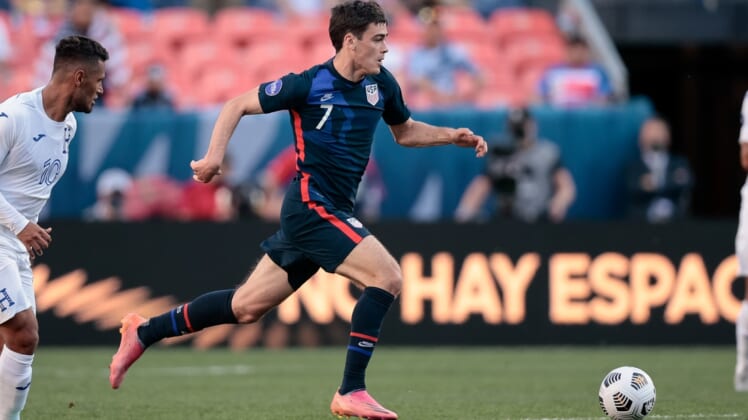 The U.S. men’s national team released its 27-player roster for its next set of World Cup qualifiers Thursday, with Giovanni Reyna on the list for the first time since he went down with a hamstring injury in September.

Reyna, a forward, returned from that injury earlier this month to play for his club, Borussia Dortmund.

Also on the roster was defender Sergino Dest, who suffered a hamstring injury earlier in the day playing for Barcelona in a Europa League match. U.S. Soccer said in a statement to media outlets that they were awaiting word on the severity of Dest’s injury before making a decision on whether to replace him.

The Americans were already missing midfielder Weston McKennie, who broke two bones in his left foot last month playing in a match for Juventus, and goalkeeper Matt Turner, dealing with a lower leg injury.

The USMNT will play Mexico at Mexico City on March 24, host Panama in Orlando, Fla., on March 27 and play at home against Costa Rica in San Jose, Calif., to finish off the set March 30.

The USMNT is second in the CONCACAF qualifying standings, trailing only Canada. The Americans are tied with Mexico in points but own the tiebreaker for now, and Panama sits in fourth.

Five points in the next three matches would be enough to clinch the USMNT a berth in the 2022 World Cup in Qatar after missing out on the 2018 tournament. The top three CONCACAF teams automatically qualify and the team finishing fourth will play an intercontinental playoff against a team from Oceania.

The full USMNT roster is below: