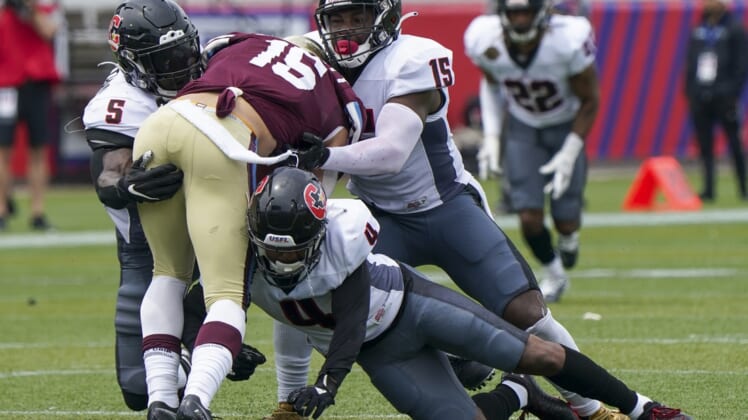 Reggie Northrup returned a fumble for a score and Clayton Thorson threw a touchdown pass as the Houston Gamblers defeated the Michigan Panthers 17-12 Sunday in both teams’ USFL opener in the first of two games at Birmingham, Ala.

Northrup finished with 11 tackles, one forced fumble and one 87-yard scamper for a score, while teammate Ahmad Gooden registered three forced fumbles and two sacks. Thorson finished 9 of 17 for 73 yards with one interception and a 12-yard touchdown pass to Isaiah Zuber.

Michigan’s Shea Patterson was 17 of 25 for 192 yards with a touchdown and no picks. Stevie Scott rushed for 72 yards and a score on 18 attempts for the Panthers.

Houston survived a late fourth-and-26 pass from Patterson to La’Michael Pettway just out of the end zone.

Jordan Ellis and T.J. Logan Jr. each recorded a rushing touchdown as New Orleans defeated Philadelphia in both teams’ opener.

Ellis ran 18 times for 89 yards — including the go-ahead score early in the fourth quarter — and Logan notched 56 rushing yards on 15 carries. New Orleans’ Kyle Sloter completed 17 of 27 passes for 150 yards with one interception.

Bryan Scott of Philadelphia went 25 of 36 for 202 yards with one touchdown and one pick. Darnell Holland provided 52 yards and a score on nine rushing attempts.

The nightcap between Tampa Bay and Pittsburgh was moved to Monday evening due to inclement weather.