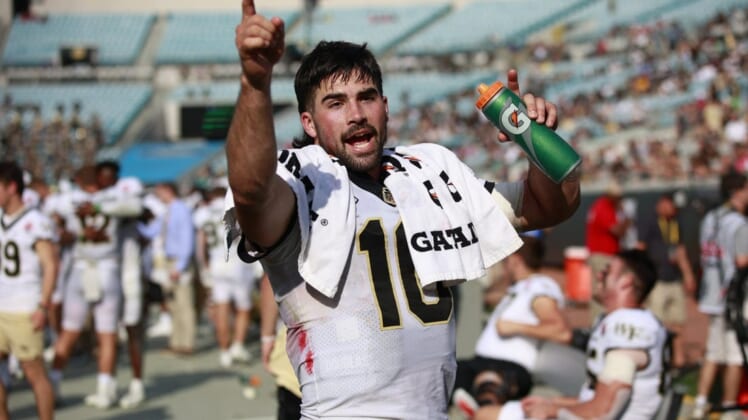 Wake Forest holds its highest preseason ranking in program history, but there are many reasons the No. 22 Demon Deacons are walking directly into the unknown.

Three weeks before the Sept. 1 opener against visiting Virginia Military Institute in Winston-Salem, N.C., Wake Forest quarterback Sam Hartman was ruled out indefinitely. The Aug. 10 announcement that he’ll miss an extended period of time for treatment for a medical condition unrelated to football was a forced reset of sorts for the program.

“It’s too early to tell exactly what the timeline is,” coach Dave Clawson said. “Anything that’s said is just speculation.”

Mitch Griffis strolls into the spotlight as the starting quarterback, at least to begin the season.

He takes over a Wake Forest team that earned a spot in the 2021 Atlantic Coast Conference championship game and matched the school record with 11 wins in 2021.

Hartman, now a third-year captain, emerged as one of the most prolific passers in the country, throwing for 39 touchdowns. The Demon Deacons ranked fourth nationally with 41 points per game.

Griffis is in his third season in the program and said he will strive to maintain the flow of the offense, not necessarily replace its triggerman.

Wake Forest is bound to have new wrinkles on defense, with Brad Lambert, who served as coordinator under former coach Jim Grobe, returning to that role. During an August scrimmage, the defense tended to stand out.

“For our program and where we’ve been the last five years, I don’t think that necessarily is a bad thing for Wake Forest football,” Clawson said of the situation.

The Demon Deacons could be anchored defensively by linebackers Ryan Smenda, who has been one of the team’s top two tacklers in each of the past three seasons, and Chase Jones.

VMI has had a notable stretch of success as well. It went 6-5 last year, giving the Keydets back-to-back winning seasons for the first time since 1961 and 1962.

“We didn’t get to finish the last season the way we wanted,” VMI coach Scott Wachenheim said, noting that last fall’s season coming months after the Southern Conference’s 2021 spring season took a toll. “Injuries played a part in that.”

Yet most preseason forecasts have VMI finishing in the bottom half of the Southern Conference.

Among the standouts for the Keydets is linebacker Stone Snyder, the 2021 Southern Conference Defensive Player of the Year. He recorded a league-best 11 tackles per game last season. Kicker Jerry Rice went 11 of 14 field goals.

It might be a bit of a rebuilding season for VMI.

“I like the energy and attention to detail that our young men are practicing with and just an eagerness to get better,” Wachenheim said. “That’s the most important thing.”

This will be the first meeting between VMI and Wake Forest since 1944 when both schools were Southern Conference members. This is VMI’s first opener against a team from a Power 5 conference since 1996 (at Mississippi).