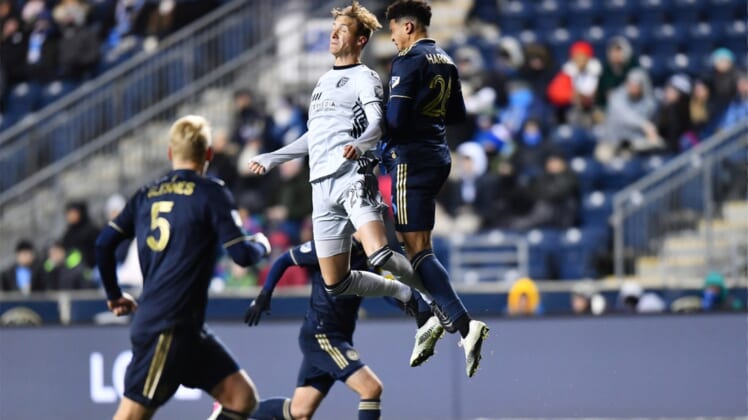 Cory Burke and Daniel Gazdag each scored one goal and the host Philadelphia Union defeated the San Jose Earthquakes 2-0 Saturday in Chester, Pa.

Goalkeeper Andre Blake (one save) earned the shutout and head coach Jim Curtin picked up his 100th career victory with the Union. Curtin became the 13th head coach in league history to win 100 games and the ninth to do so with one club.

The Union (2-0-1, 7 points) extended their unbeaten streak to three to open the season.

The Earthquakes (0-2-1, 1 point) are still looking for their first win of 2022. They have conceded eight goals in three games.

The Union controlled the offensive tempo through the opening 15 minutes with several solid scoring chances.

In the 18th minute, San Jose goalkeeper JT Marcinkowski (three saves) made a stellar save off a header by Nathan Harriel from point-blank range.

The Earthquakes earned their first corner kick in the 22nd minute, but they played it short and nothing materialized.

Philadelphia then went ahead 1-0 in the 23rd minute when Sergio Santos sent a crisp pass through the box which Burke tapped into the net.

Santos nearly extended the lead in the 30th minute, but he pitched a shot from about 18 yards out just wide of an open net with Marcinkowski out of position.

In the 41st minute, San Jose’s Cristian Espinoza wriggled free just outside the top of the box and ripped a shot, which was gathered up by Blake.

The Union pulled ahead 2-0 in the 58th minute when Gazdag scored on a penalty kick. San Jose’s Jackson Yueill was whistled for a hand ball in the box, setting up the penalty kick.

The game became quite chippy with players on both clubs going down a number of times.

The Earthquakes had two scoring opportunities in the 80th minute, but they weren’t able to get on the other end of a cross and then a shot was blocked on the rebound.

Despite eight minutes of stoppage time, the Union held on rather easily for the clean sheet.