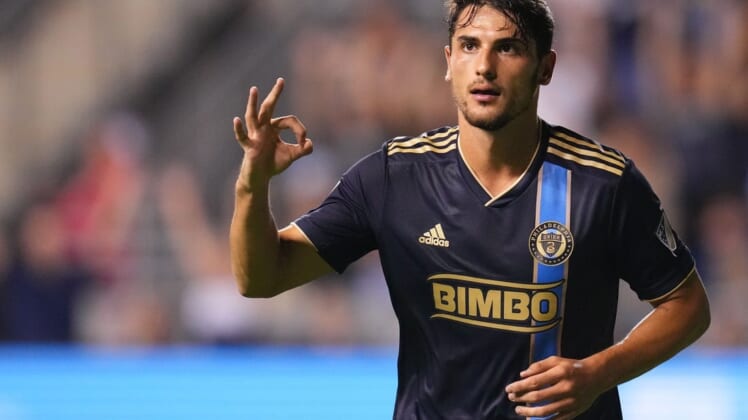 The Philadelphia Union became even more formidable when they exercised the loan option on Julian Carranza from Inter Miami CF.

Carranza will look to help the Union extend their winning streak to three matches on Saturday when they host the New England Revolution in Chester, Pa.

The 22-year-old Argentine striker has seven goals and four assists with the Union (9-2-9, 36 points), who will enter the game in first place in the Eastern Conference.

The Union followed their 7-0 thrashing of D.C. United with a 2-1 victory over Inter Miami CF on Wednesday.

“What we’ve seen over the length of his time here has been really solid and stable,” Union head coach Jim Curtin said of Carranza, who registered a hat trick against D.C. United. “He’ll keep doing his job. He’ll keep working like he is and I think the rest will take care of itself.”

Daniel Gazdag and Cory Burke each scored one goal for the Union in their win over Inter Miami CF. Goalkeeper Andre Blake and defender Kai Wagner, who were both named to the All-Star Game next month, each turned in another solid all-around performance.

Meanwhile, defender Jack Elliott (knee) missed his first game of the season. It’s unclear if Elliott will return to face the Revolution.

“Somebody owes our players and coaches an apology,” Revolution head coach Bruce Arena said. “I’m waiting to hear that.”

Carles Gil, however, was unable to locate much open space offensively.

Gil is headed to the All-Star Game for the second straight season.

“I thought our team played really well. I really do,” Arena said. “The heart they showed in the second half was remarkable. And actually we had a chance to make it 3-3 if they gave the penalty kick on DeJuan (Jones). At 3-2 we had a chance to get a penalty and they went down the other end and scored. So I just give our guys a lot of credit.”