Jan. 1, 2010: A fan smiles as she congratulates FSU coach Bobby Bowden after his final game against West Virginia at Jacksonville Municipal Stadium for the Gator Bowl. [Kelly Jordan, Florida Times-Union]

Terry Bowden, coach of the Louisiana-Monroe football program, left the team Thursday to be with his father, Hall of Fame coach Bobby Bowden.

First-year associate head coach Rich Rodriguez, the former head coach at West Virginia, Michigan and Arizona, is filling in for Terry Bowden during his absence from the team.

UL-Monroe, of the Sun Belt Conference, opens its season Sept. 4 at Kentucky. 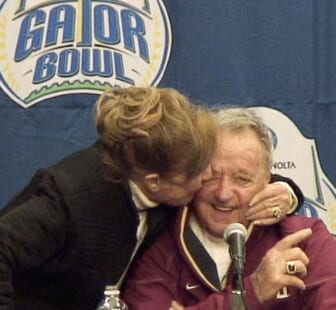 After Bobby Bowden announced in a statement last month that he was fighting a terminal medical condition, his son was the first to reveal it was pancreatic cancer when speaking at Sun Belt media day.

“We’ve been preparing for this,” Terry Bowden said. “We know when you have pancreatic cancer, which is what the disease is, you’re probably talking months, not years, so we know that. We just think we’ve got some more good days ahead, and we’re going to enjoy those together.

“I would plead that all people would respect the fact he needs to rest when he’s up,” he added. “He doesn’t need a lot of phone calls, or a lot of people talking on the phone. You know my dad; he has never turned down an interview in his life. He’ll be on his deathbed (doing) an interview the last minute he does it. But, that’s Bobby Bowden.”