UFC 274 results: Biggest winners and losers from May 7 card 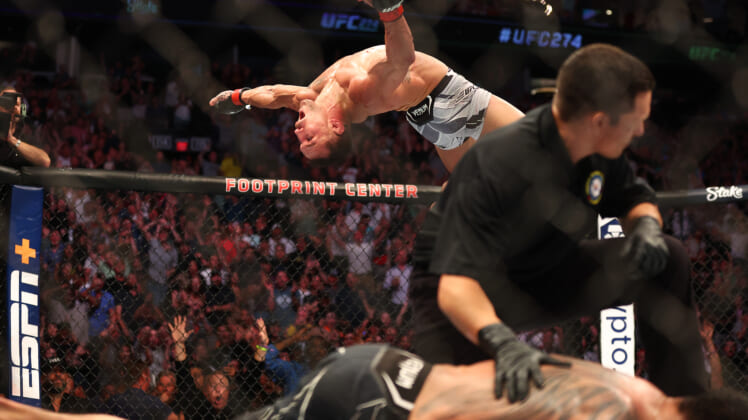 The UFC 274 results offered up some major moments as a plethora of top-ranked fighters and fan favorites took to the Octagon to do battle on Saturday night, inside Phoenix’s Footprint Center.

The pay-per-view card featured two bouts with UFC gold on the line. In the night’s co-main event, reigning strawweight champion Rose Namajunas looked for revenge against former division queen Carla Esparza, in a championship rematch eight years after their first encounter in the finals of The Ultimate Fighter. Despite the talent involved, Esparza regained the title in one of the most boring big-time bouts in UFC history

In the headliner, lightweight elites Charles Oliveira and Justin Gaethje battled to decide the king of the weight-class mountain. At the end of the night, the Brazilian was victorious wtih a destructive first-round submission win. Unfortunately, after missing weight on Friday, the belt will now be vacant and Oliveira is the No.1 contender.

The card also featured several other Octagon greats and beloved talents like Tony Ferguson, Mauricio Rua, Michael Chandler, and Brandon Royval. Let’s take a look at the fighters who had memorable nights on May 7, and those who will look to forget their failures at UFC 274.

There is no doubt whatsoever. Charles Oliveira is the best lightweight MMA fighter on the planet. In steamrolling the uber-durable Justin Gaethje and making him tap, “do Bronx” solidified his place as the best 155-pounder in the sport, and a top-five pound-for-pound superstar. However, while being a winner he is also a loser on the night because he leaves Arizona without his title and will have to go win it once again in his next appearance in the Octagon.

Rose Namajunas is going to look back on her UFC 274 loss and wonder what happened? She was clearly the better fighter but seemed completely unwilling to take even the slightest risk and unleash her weapons to overwhelm Carla Esparza and win rounds. The fight ended up being the absolute worst title bout in UFC history because both fighters were risk-averse. However, the former champion will take most of the heat for handing over her title in the most confusing and lackluster performances of her career.

Michael Chandler needed a win and he got it with a highlight-reel knockout that will be on UFC marketing material for the next decade. His front kick KO of Tony Ferguson was a shocking moment as one of the toughest fighters of the last decade was left face down and prone. “Iron” may not get a title shot next, but he may get something better by cashing in on a Conor McGregor fight lottery ticket.

Mauricio “Shogun” Rua looked every bit of a 40-year-old fighter with 50-fights and a lot of wars under his belt on Saturday. There is no doubt the UFC will let him finish out the last fight on his contract, but his loss to Ovince St. Preux at UFC 274 was another example that his decision to continue his career is only muddying the memories of what was a legendary fight career.

The women’s featherweight division in the UFC is on the edge of oblivion and there still isn’t a fighter that has stepped up and shown they can take the division into the future, once champion Amanda Nunes decides to retire. Norma Dumont and Macy Chiasson had a chance to show they can be the that at UFC 274. Unfortunately, they delivered a lackluster fight and did not make the division seem rich with exciting talent. It just seems like it’s a matter of time before the weight class no longer exists in the UFC, and that’s a shame for female featherweights around the world.

Brandon Royval really needed a win at UFC 274, and he got it in classic “Raw Dawg” fashion. With a slick and unexpected snatching up of a submission. After losing two straight, it seemed as if he had hit a ceiling and might be just under the group of elites in the division. On Saturday, he showed he still has a lot of potential still in him and can continue to grow at only 29-years-old.

Matt Schnell has had a difficult last few months after having a couple of bouts canceled at the worst possible time and then losing his mother during his fight camp for Brandon Royval. Early on in his bout with the talented flyweight, Schnell looked on point and even hurt his opponent. Unfortunately, he made a mistake and left his head during a scramble and the talented grappler snatched it up and forced him to tap. He is 1-2-1 in his last four and has lost much of the momentum he gained with a four-fight win streak a few years ago.

After losing his promotional debut to Michel Pereira in January, Andre Fialho has been on a tear. At UFC 274 he competed a month after just fighting in April and got the same exact result: a first-round knockout. With 13 KOs in 16 career wins, the native of Portugal is building a reputation as a dangerous fighter at welterweight and one to keep an eye on throughout 2022.