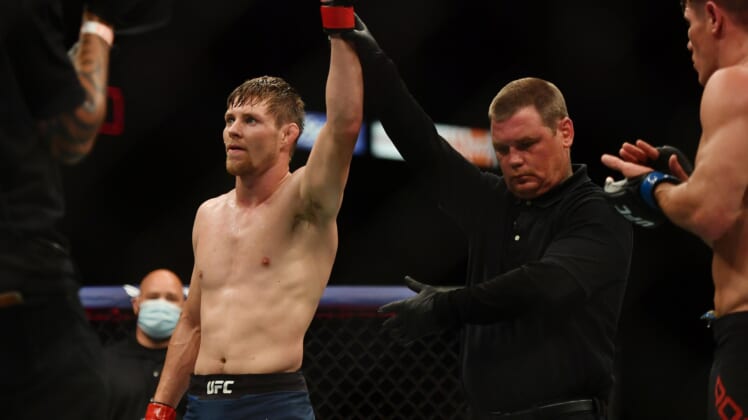 UFC 249 is here, and we will be updating you throughout the evening with full coverage of Saturday night’s exciting fights from start to finish on Sportsnaut.

The event takes place at VyStar Veterans Memorial Arena in Jacksonville, Fla. The main card airs on pay-per-view following prelims on ESPN and ESPN+. The early preliminary card features three exciting fights that will provide an opportunity for future contenders to stake their claim for bigger fights in their respective weight classes. So, let us look at the results of the early preliminary card of UFC 249.

“Smiling” Sam Alvey is a fan favorite for his charming personality and gritty fighting style. Unfortunately, he is on a four-fight losing streak and facing a surging Ryan Stann who is on a seven-fight win streak. From the opening bell, Spann attacked and was a busier fighter than Alvey utilizing solid wrestling and almost submitted Alvey with a tight standing arm triangle choke early in the fight.

The remainder of the fight saw “Smiling Sam” be patient and utilize counter punching while looking for a big KO punch. Spann pressed the action using his range effectively till the end of Round 3 and with  90 seconds left in the fight, Spann got caught by a huge punch and was nearly finished. It was too little too late for Alvey and Spann was able to hold on and secure a split decision victory over a very durable veteran Sam Alvey.

Little was done by Spann to boost his stock in a very tough Light heavyweight division. Spann performed well enough to earn a victory and is now 4-0 in the UFC but needs to significantly improvement before he is a considered a Light heavyweight contender. With a five-fight winless streak under his belt, “Smiling Sam” Alvey will most likely be released from his UFC contract.

Bryce Mitchell has been mentioned as a future Featherweight contender and he did not disappoint anyone from the start of Round 1. Mitchell put on a submission clinic and transitioned from submission to submission with ease. Charles Rosa showed his toughness and held on through multiple head and arm chokes and several rare twister submission attempts. Hands down Mitchell displayed some of the most impressive grappling I have seen in years earning himself a dominant unanimous decision victory over a durable and tough Charles Rosa.

Make no mistake about it Charles Rosa is tough and with stood an all-out grappling assault from Bryce Mitchell. Surviving the fight and not being submitted was an accomplishment for Rosa as most anyone else would have been submitted in his place. Bryce “Thug Nasty” Mitchell is a contender in the Featherweight division and is a treat to watch. The scariest part about “Thug Nasty” is he only a few years in to his career and will get better each fight.

Both fighters are durable and battle tested inside the Octagon but are looking to increases their stock in a crowded welterweight division. Each fighter utilized hard kicking and punching right from the start of the fight and showed why they are both respected veterans inside the Octagon. Niko Price seemed to have crisper striking and harder punching throughout the early part of the fight and it took a toll on his durable opponent at multiple points in the first round. Luque showed his toughness though and both fighters slugged it out for the remainder of the fight. This would have been a tough fight to decide a winner if the fight went the distance. Unfortunately, Price was knocked down and cut badly late in the fight forcing the referee to stop the fight late in the third round giving a TKO victory to Vicente Luque.

Referee Jason Herzog made the right call to stop the fight as Niko Price was cut badly and his eye was swollen shut. While the odds are against either fighter ever holding the welterweight championship, they’re both tough and exciting fighters to watch.  This was an exciting contest that would have been a crowd favorite in front of a live crowd. Kudos to both fighters on a solid and exciting fight!!!!