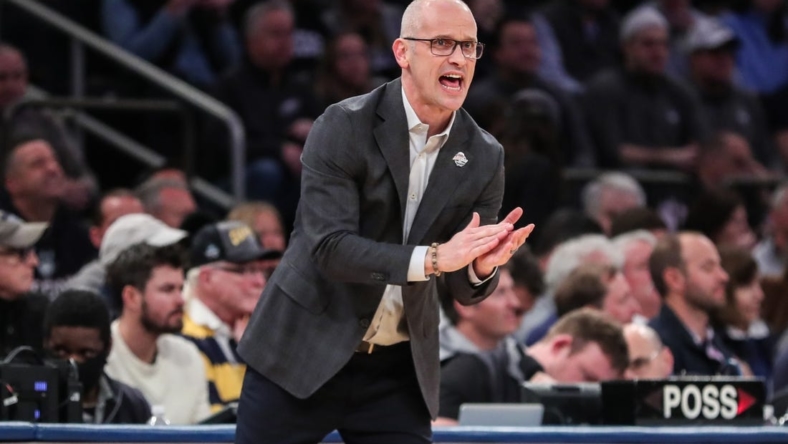 UConn made sure Stonehill’s Division I debut was memorable — for all the wrong reasons.

The Huskies held Stonehill to 16-of-45 shooting (35.6 percent) and earned an 85-54 victory Monday night in Hartford, Conn., in the season opener for both teams.

UConn’s Adama Sanogo, the Big East preseason player of the year, led all scorers with 19 points on 8-of-11 shooting and grabbed six rebounds in 19 minutes. Sanogo averaged 14.8 points and 8.8 rebounds last season, when the Huskies went 23-10 record and made their second trip to the NCAA tournament in as many years.

The Huskies received 13 points from Alex Karaban and 11 from Hassan Diarra. Donova Clingan had a team-high seven rebounds.

UConn won by a comfortable margin despite struggling from behind the 3-point arc. The Huskies made only 5 of 24 on treys, but they had a 44-24 edge in rebounds.

The Skyhawks moved from Division II to Division I in the offseason, when they joined the Northeast Conference. Stonehill went 15-12 during the 2021-22 season, and returned five of its top six scorers.

Andrew Sims, who led Stonehill with 15.2 points last season, and Isaiah Burnett each tossed in a team-high 12 points. Burnett added six rebounds for the Skyhawks, who never led.

Stonehill committed 12 turnovers in the first half and trailed 38-19 at the break. The Skyhawks missed 10 of their first 11 shots and were down 28-9 with 4:44 remaining in the half.

UConn outrebounded Stonehill 23-13 in the first half and scored 14 points off turnovers. The Huskies used 13 players, nine of whom scored.