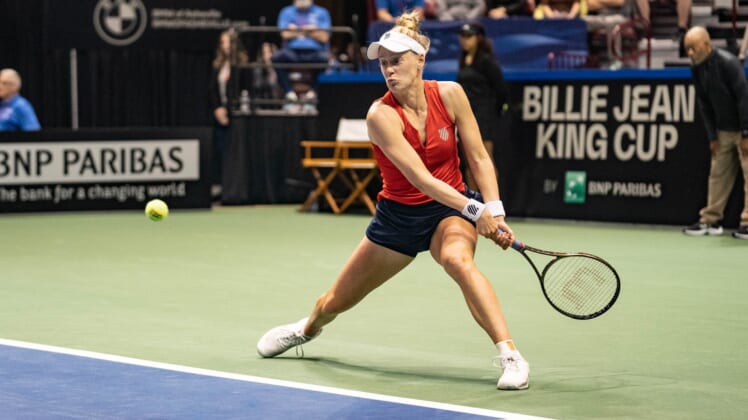 In a tennis matchup overshadowed by weightier events, the United States team took a 2-0 lead on the Ukrainian team on Friday in the qualifying round for the Billie Jean King Cup in Asheville, N.C.

Event namesake Billie Jean King was in attendance for the matchup featuring a squad of visiting players from a nation fighting an invasion from neighboring Russia. Both teams and King stood together for a rendition of the Ukrainian national anthem, and a moment of silence was held for “the people of Ukraine.”

The U.S. won both of the singles matches that followed in straight sets, due in part to an epic tiebreaker victory. Alison Riske edged Dayana Yastremska 7-6 (16), 7-5, with the American player saving four set points in the first-set tiebreaker. Jessica Pegula defeated Katarina Zavatska 6-2, 6-1 to give the hosts a commanding edge heading into Saturday’s reverse singles and doubles match in the best-of-five series.

Four other teams built 2-0 leads in their qualifying series. Italy leads visiting France in Alghero, host Kazakhstan leads Germany in Nur-Sultan, host Poland is in front of Romania in Radom, and visiting Spain leads the Netherlands in ‘s-Hertogenbosch.

The host Czech Republic and Great Britain are level 1-1 at Prague, and Canada led Latvia 1-0 following the opening match in Vancouver.

Belgium drew a walkover victory against Belarus due to the latter’s status as an ally of Russia in the invasion of Ukraine. Both Belarus and defending champion Russia are currently banned from international team tennis competitions. Australia gained Russia’s automatic berth in the November finals, joining Belgium, Slovakia, Switzerland and this week’s eight winners.