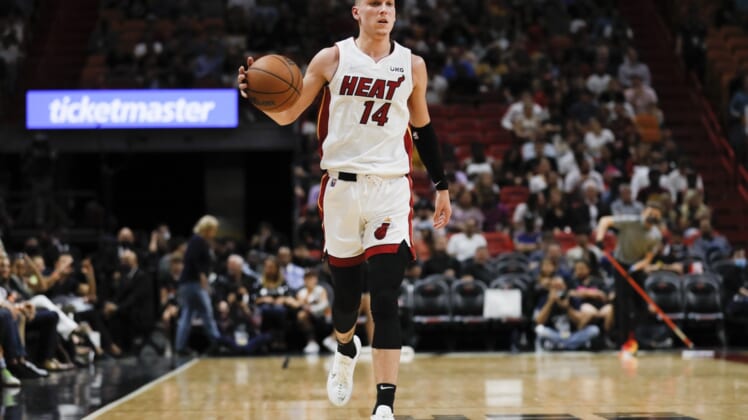 Tyler Herro scored a season high 35 points, leading the host Miami Heat to a 144-115 win over the Charlotte Hornets on Tuesday night.

Miami set records for most points in a regulation game and most 3-pointers in any contest (23).

However, the Heat lost starting forward P.J. Tucker (right calf strain) in the first half. He finished with seven points and seven rebounds in 22 minutes.

The Heat was also without coach Erik Spoelstra (COVID-19 protocol) for the second straight game. He was again replaced by assistant Chris Quinn.

In the first quarter, Charlotte made its first five shots and raced to a 14-4 lead. By the end of the quarter, Charlotte led 32-29 thanks to 58.3 percent shooting and a 7-0 edge on fast-break points. Miami shot just 42.9 percent.

The Heat responded by shooting 77.3 percent in the second quarter, including 6-for-8 on 3-pointers, and scored 41 points en route to a 70-60 halftime lead. Robinson led all first-half scorers with 18 points, making 6-of-7 from long range.

Charlotte started the third quarter on an 8-0 run by making four straight shots in the paint.

The Hornets edged ahead 80-79 on P.J. Washington’s floater with eight minutes left in the third. By the end of the quarter, Miami led 102-97, although Charlotte shot 70 percent for the period.

However, the Heat got off to a 17-5 start in the fourth, pulling away for the victory.