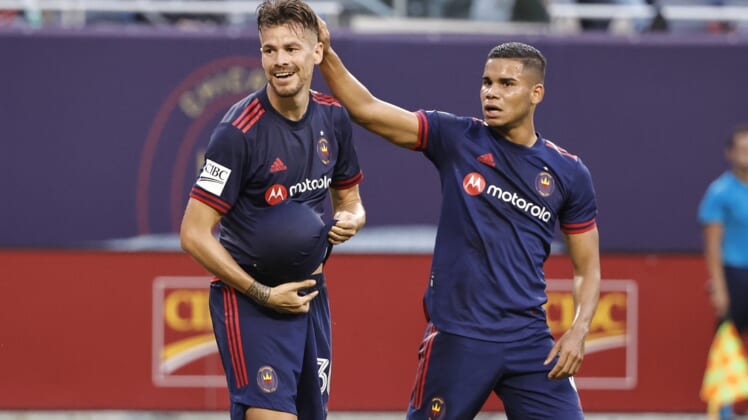 Paredes scored in the 82nd minute and Kamara converted a penalty kick in the 87th minute to give D.C. United the draw.

Chicago’s Gaston Gimenez collected his first MLS goal and the Fire also scored on a D.C. United own goal.

Bobby Shuttleworth made four saves for Chicago (3-8-3, 12 points) and Bill Hamid had one save for D.C. United.

Frank Klopas served as Chicago’s coach for the second straight game as head coach Raphael Wicky attends to an urgent health emergency in his native Switzerland.

The Fire were leading comfortably until Paredes sent a left-footed shot on goal in the 82nd minute. The ball caromed off the right post and into the net for his second goal of the season to bring D.C. United within 2-1.

A few minutes later, Chicago’s Jonathan Bornstein was called for a penalty for taking down Andy Najar in the box. Kamara lined up for the penalty kick in the 87th minute and easily put the ball in the net for his team-leading sixth goal.

Gimenez scored in the 32nd minute after Boris Sekulic spotted him and sent a cross in his direction. Gimenez leaped and snapped off a header that clipped Hamid’s hand on the way to the right corner of the net.

The Fire got their second goal in innocent fashion. Miguel Angel Navarro was attempting to pass toward the center of the goal, but the ball caromed off the leg of Najar, leaving Hamid helpless as it trickled into the net to give Chicago a 2-0 edge.

Nigel Robertha delivered a left-footed blast on goal in the seventh minute that Shuttleworth got his right hand on to make the save.

One minute later, Frederic Brillant’s close-range header off a corner kick was stopped by Shuttleworth.

In the 41st minute, Yamil Asad was left unguarded near the back of the box but sent his right-footed shot to the right of the net.