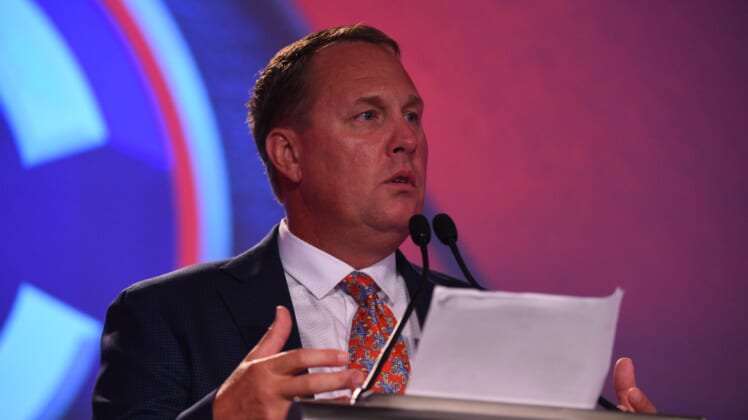 Hugh Freeze is back coaching college football again after leaving Ole Miss in disgrace due to a veritable smorgasbord of NCAA violations. On Friday, Freeze was introduced as the new head football coach at Liberty, a private Christian school in Lynchburg, Virginia.

At one point he seemed to acknowledge that one of the sticking points in the NCAA investigation into his conduct at Ole Miss — multiple phone calls made to escorts — may have been well founded rather than just wrong numbers, as he previously indicated.

As he discussed his past indiscretions, Freeze broke down in tears.

All this was pretty extraordinary. And then, Freeze said something that set social media on fire.

Liberty coach and “great family man” Hugh Freeze, who lost Ole Miss job for calling escorts, says Jesus is “the only one who can handle my junk” https://t.co/riOLF2zQsn pic.twitter.com/ezCDx5sLs6

This really felt like the ultimate Freudian slip coming from this man. Not surprisingly, it prompted a plethora of reactions on Twitter.

Cannot stop imagining Hugh Freeze as Cal Naughton Jr. from Ricky Bobby. We’re a Hugh Freeze “Shake and Bake" away from: “I like to think of Jesus in a tuxedo T-shirt. It says I’m formal, but I’m here to party. I like to party, so I like Jesus to be able to handle my junk, too.” pic.twitter.com/14PjoM1aLh

“Jesus can help with that” – Hugh Freeze https://t.co/6HFH2cnsML

I heard Hugh Freeze say it. Then I was like, nah, he didn't say that, I misunderstood. Then my timeline went crazy. #Jesus #junk pic.twitter.com/r1SMeLnI1a

Are we sure Liberty didn’t hire Michael Scott? Hugh Freeze’s past aside, who tf thinks it’s a good idea to coach at a faith-based school and then when asked about it go “[Jesus] is the only one I’ve ever met who can handle my junk”
Why? What are you thinking Hugh?

Methinks @CoachHughFreeze should never — AND I MEAN NEVER — use the term "handle my junk." Just. Don't. Do. It.
Sweet sassy molassy, y'all
Real life has become a Saturday Night Live skit https://t.co/Mcg5YlOyiJ