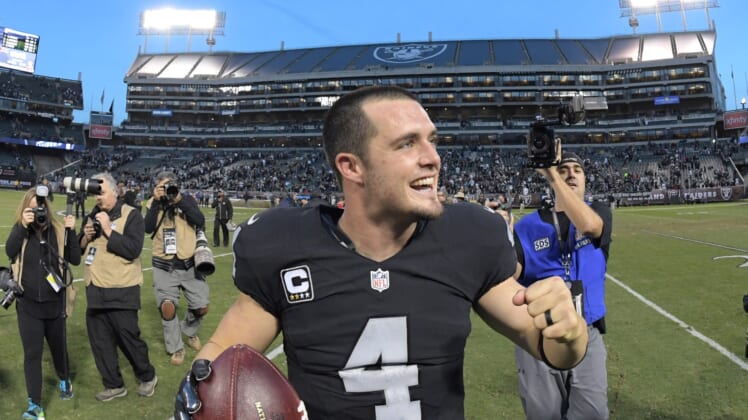 The Oakland Raiders just made quarterback Derek Carr the richest player in the NFL. He was largely deserving of a huge raise to boost the less than $1 million he was previously slated to earn in 2017.

The five-year, $125 million contract extension Carr just inked takes care of him being one of the most grossly underpaid quarterbacks in the league. His gigantic salary will now set the tone for other quarterbacks whose contracts will soon be expiring.

As you can imagine, the breaking news regarding Carr’s newly acquired wealth set off a roller coaster of varying reactions on Twitter. Some are supportive, others are hilarious and some folks are shocked.

Here we go, starting with Carr showing his gratitude for all of the support he has been given.

Tried keeping up! Thank you to family, friends, teammates, opponents, and fans who sent me a text/tweet. Appreciate all of you! God is good

Woke up and seen @derekcarrqb new contract and got out of bed so fast lol, I can't get paid sleeping ?? Congrats bro you deserve it..

The $25M per year threshold is one no QB has reached. Now Raiders and Derek Carr have done it. Stafford, Cousins, all QBs should be thrilled

Congrats on reaching the salary of the average NBA 6th man @derekcarrqb ?

Derek Carr will get $25 million a year and can now afford a one-bedroom apartment in the Bay Area.

@derekcarrqb how bad does your new contract impact future free agent signings How do we win a SB with most of the money going to u ?

Tom Brady got 5 ring's and David Carr have none but Carr the highest player in the #NFL #ThatsCrazy pic.twitter.com/WaZvgZgYxj

You won't find a harder working or more deserving man than @derekcarrqb. Congrats! I am happy for you & your fam & excited for what is next! https://t.co/511hyZVOo9

These were just some of the thousands of reactions we skimmed through on Twitter. As previously indicated, the thoughts, opinions and support of Carr wildly vary from one end of the spectrum to the other.

We wish Carr future success as he attempts to advance the Raiders once again, beyond the regular season.

Now it's done ?! From the jump I've wanted to be a Raider 4 life. One step closer to that! Blessed!!! Business done! Let's just play now!!!