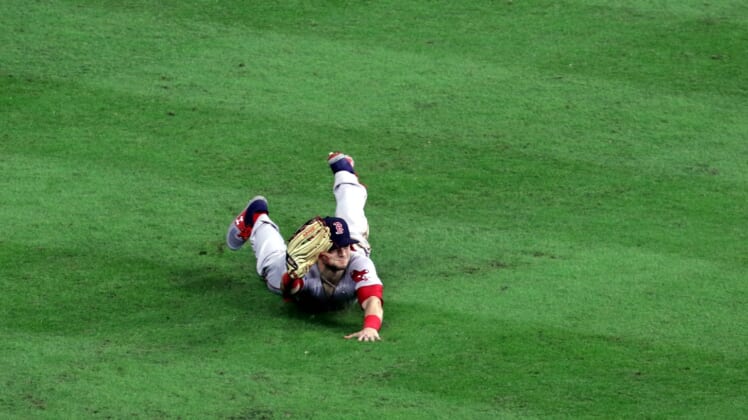 As the ball dropped towards the outfield grass, so also did the collective hearts of Boston Red Sox fans. Then in an instant, Andrew Benintendi’s miraculous catch saved the game and now puts the Red Sox one game shy of a trip to the World Series.

Boston’s heart was pounding in the ninth inning after Craig Kimbrel loaded the bases and faced Alex Bregman, Houston’s best hitter, in the biggest moment. Bregman lined it into left field, if it dropped the Astros would almost certainly win, but another magical moment happened for the Red Sox.

WHAT A CATCH FROM BENINTENDI!!!! pic.twitter.com/UalEr3Ff6Z

Benintendi timed his dive perfectly and snuck his glove under the ball right before it hit the ground, delivering the biggest play of the series and saving Kimbrel from an embarrassing blown save.

A moment that will go down as one of the best defensive plays in postseason history lit up social media as Twitter erupted to the incredible moment that swung the entire series.

I changed my mind whether Benintendi had it or not like five times during that fraction of a second when the ball was in the air.

Andrew Benintendi is all set with a present.

Kimbrel owes Benintendi a beer or 100.