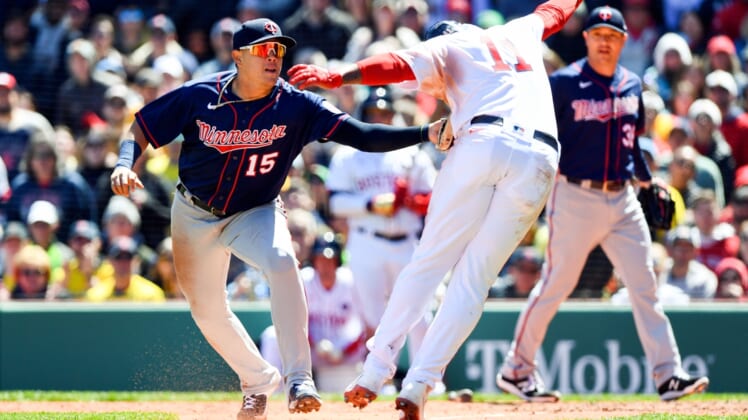 Polanco and Kyle Garlick each hit two-run home runs, while Carlos Correa also had two hits for the Twins, who broke the game open with a four-run eighth inning and split the four-game series at Boston.

For Boston, Xander Bogaerts had three hits with an RBI, while Christian Vazquez and Alex Verdugo each had two hits. Vazquez hit a home run and drove in a pair of runs. Rafael Devers became the first Red Sox player to have a 15-game hitting streak since Bogaerts in 2017.

After playing from behind in Boston’s back-to-back wins, the Twins jumped out to a 2-0 first-inning lead. Garlick’s line drive just cleared the Green Monster in left for a two-run homer after Correa lined a single to center two batters earlier.

Gilberto Celestino hit a leadoff single to center in the third and Polanco hit a home run to left-center to increase Minnesota’s lead to 4-0 in the third.

As the first Massachusetts-born pitcher to start on Patriots’ Day for the Red Sox, left-hander Rich Hill (0-1) lost after allowing four runs and six hits in 4 2/3 innings with two walks and two strikeouts.

Boston made it 4-1 in the fifth as Vazquez brought home Verdugo on an RBI grounder.

Verdugo, who has a hit and an RBI in five-consecutive games, led off the fifth with a double to left and moved to third on Christian Arroyo’s ground ball single to set up the first Sox run.

The Twins scored four times in the eighth after being held scoreless the previous four innings. All four of reliever Kutter Crawford’s walks in the inning came around to score, two on wild pitches and two on Polanco’s two-out, two-strike single to right.

Bogaerts hit a single past second base to drive in Boston’s ninth-inning run.