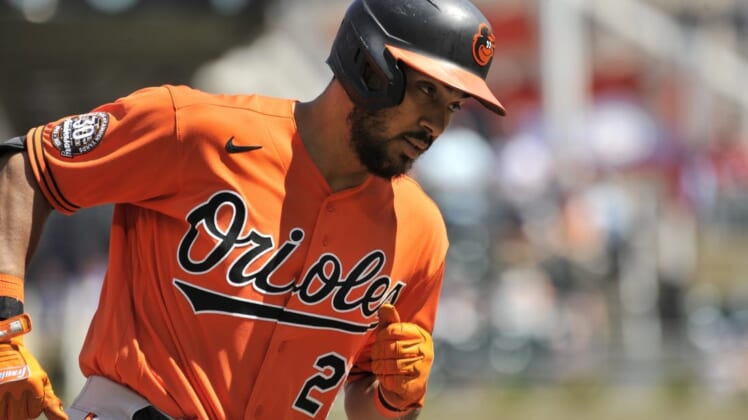 Jose Miranda singled in Alex Kirilloff with the winning run in the bottom of the ninth inning to give the Minnesota Twins their second straight walk-off win over the Baltimore Orioles, 4-3, on Saturday afternoon in Minneapolis.

Minnesota tied it at 3 when Jorge Polanco hit a 425-foot homer off Jorge Lopez (3-5) into the bullpen in left-center leading off the bottom of the ninth.

One out later, Kirilloff doubled off the bottom of the fence in left-center and then advanced to third on a broken-bat single by Gary Sanchez. Miranda then followed with a sharp single to left to win it.

The Twins won Friday night’s series opener, 3-2, on Byron Buxton’s two-run homer off Lopez in the bottom of the ninth. Lopez had not allowed a home run in 37 1/3 previous innings before Buxton and Polanco homered in back-to-back at-bats.

Nick Gordon hit a home run and Luis Arraez, Gio Urshela and Gordon each had two hits for Minnesota which won its 12th consecutive game over the Orioles at Target Field, a streak dating back to July 9, 2017. Emilio Pagan (2-3) picked up the win with a 1-2-3 ninth that included two strikeouts.

Anthony Santander homered and Tyler Nevin had an RBI double to lead Baltimore.

The Orioles took a 1-0 lead in the second inning when Ryan Mountcastle led off with a double and scored two outs later on Nevin’s line double into the gap in right-center.

Santander made it 2-0 in the third when he clubbed his 15th homer of the season, a 375-foot drive into the bleachers in right.

Baltimore extended its lead to 3-0 in the fourth. Rougned Odor opened the inning with a line-drive double over the head of left fielder Alex Kirilloff and then was sacrificed to third by Robinson Chirinos. After Nevin walked, Jorge Mateo drove in Odor with a sacrifice fly.

Minnesota cut it to 3-1 in the seventh on Gordon’s fourth homer of the season, a 410-foot drive to dead center.

The Twins closed to 3-2 in the eighth when Urshela led off with a single and pinch-runner Gilberto Celestino then advanced to third on a double by Arraez. After Buxton struck out, Celestino scored on a sacrifice fly by Carlos Correa.