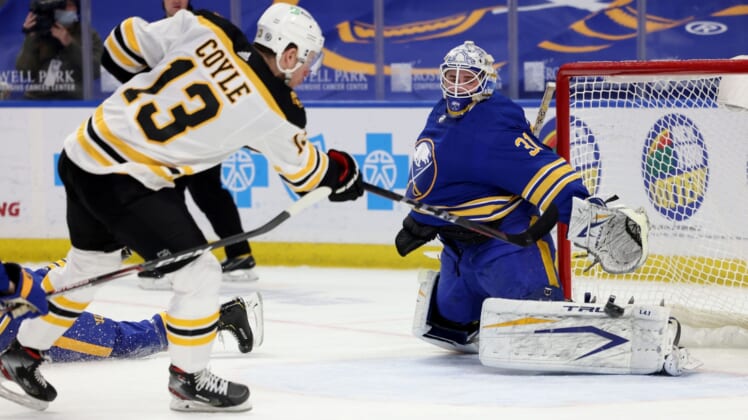 Brad Marchand and Connor Clifton each score and Tuukka Rask made 32 saves to record his first shutout in more than a year and Boston matched its longest winning streak of the season at five with a 2-0 over the host Buffalo Sabres on Tuesday night.

Rask wasn’t severely tested, but did make a stellar extended pad save to keep Buffalo’s Dylan Cozens from tying the game during the middle portion of the first period. It was the first shutout since March 10, 2020, for Rask, who posted his third straight victory while facing the Sabres for the first time since December 2019.

Still in the mix for the East Division title, the Bruins have won five straight for the first time since the start of February. They’ve also posted victories in each of their last nine games against the Sabres. These teams will play again Thursday and Friday — also at Buffalo.

Dustin Tokarski made 39 saves for the Sabres, who were 3-1-1 in their previous five games. On Tuesday, Buffalo showed plenty of spirit and even pulled Tokarski with more than a minute to play in regulation for a 6-on-3 scenario, but still was not able to convert.

Tuesday marked the eighth time this season that Buffalo was shut out.

The Bruins pressured from the start and it was Marchand who opened the scoring at the 8:06 mark in the first period by converting the rebound of David Pastrnak’s shot. That was the only goal of a period that saw each team register nine shots.

Boston made it 2-0 courtesy of its fourth line. Amid a scrum in front of the Sabres net, Clifton got his stick on the puck and squeezed it past Tokarski, just 3:03 into the middle period, for his first goal of 2020-21.

Marchand has posted five of his 24 goals in the last four games. Pastrnak, meanwhile, has recorded six assists over the same time span.