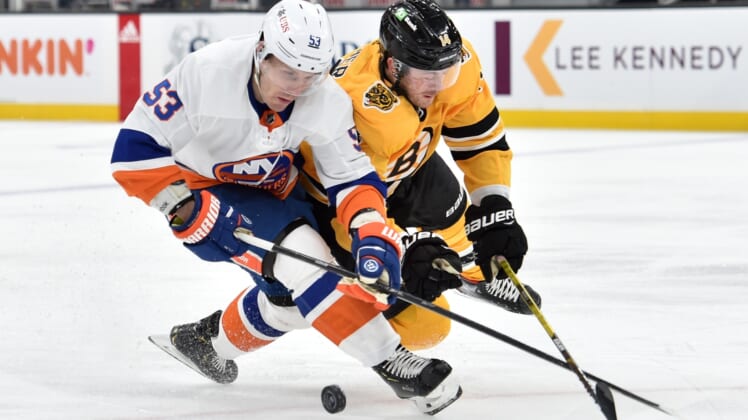 Marchand scored early in the first period to reach the 20-goal plateau for the 10th time in 12 seasons. He sealed the win by scoring into an empty net with 1:36 remaining in the third period.

Rask made 22 saves in his return to action since exiting after the first period of the Bruins’ 4-3 overtime loss to the Islanders on March 25 with an upper-body injury.

Craig Smith scored a power-play goal in the first period and Taylor Hall tallied in the third for the Bruins, who defeated the Islanders for the first time in six meetings this season. The teams will reconvene in Boston on Friday.

New York’s Travis Zajac scored in the second period to collect his first point in four games since being acquired from the New Jersey Devils last week. Semyon Varlamov finished with 41 saves in the loss.

Defenseman Mike Reilly’s shot from the point caromed off the back of Marchand and past Varlamov to open the scoring 1:49 into the contest.

Boston doubled the advantage during its fourth power play of the night.

David Krejci feathered a soft centering feed to Smith, whose one-timer from the high slot sailed inside the left post with 2:05 remaining in the first period. The goal was Smith’s 10th of the season and third in as many games.

New York halved the deficit 2:56 into the second period after Mathew Barzal’s pass from behind the net found an unmarked Zajac, who scored from the doorstep. The goal was Zajac’s eighth of the season, while Barzal’s assist was his team-leading 25th of the season and ninth in his last nine games.

Hall regained Boston’s two-goal advantage at 1:52 of the third period after fending off defenseman Adam Pelech before beating Varlamov from deep in the left circle. The goal was Hall’s third of the season and first since being acquired by the Bruins on Monday.