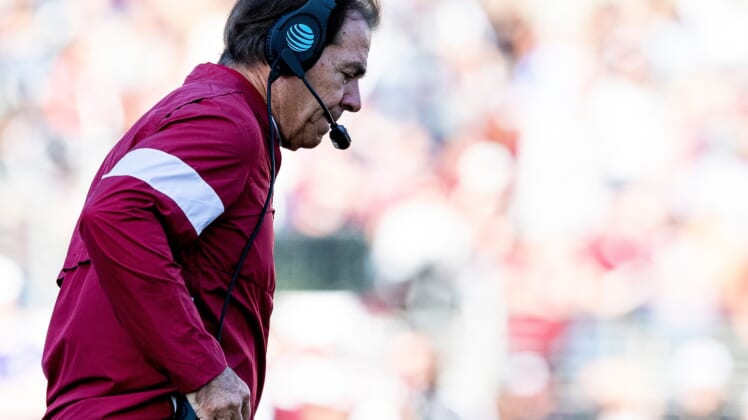 Alabama head coach Nick Saban walks to the sidelines after quarterback Tua Tagovailoa was injured against Mississippi State at Davis Wade Stadium on the MSU campus in Starkville, Ms., on Saturday November 16, 2019. Bama1021

The Alabama Crimson Tide aren’t just one of the most successful college football programs in the NCAA, it’s also a driving force behind Tuscaloosa’s economy. Now, with the chances of the COVID-19 pandemic canceling the 2020 college football season, the city could be headed for a disaster.

Tuscaloosa could lose $2 billion if no Alabama football season

Nick Saban has helped make the Crimson Tide the heart and soul of Tuscaloosa. When college football season arrives, more than 100,000 fans flock to Bryant-Denny Stadium each game to watch Alabama play.

Alabama’s football games are a massive generator of revenue in the city, generating $25 million per game during the 2015-’16 season. Local businesses have taken advantage as well, but that could all change due to the COVID-19 pandemic.

Tuscaloosa’s Mayor Walt Maddox told CBS 42 that a lost college football season would be devastating for the city. If Bryant-Denny Stadium is vacant this fall without a single game being played, it could cost the city approximately $2 billion in lost revenue.

“It would be economically catastrophic for Tuscaloosa if there is no football season,” Maddox said, via CBS 42. “Even a mitigated football season with restricted attendance and number of ball games would have dire economic consequences.”

The concern comes at a time when universities across the country are dealing with a COVID-19 outbreak. The LSU Tigers quarantined 30 players this past week and the Clemson Tigers reported 23 football players tested positive a day earlier.

While the NCAA still hopes there will be a college football season this fall, the chances of it happening seem to decrease by the day. Instead of being out on the field training, players are stuck in isolation either quarantined for safety or due to a positive COVID-19 test.

It now looks like things will get even worse for many universities and the economic disaster will also impact cities across the country.

Alabama is currently experiencing a significant spike in cases of COVID-19, per CNBC. The state had a total of 29,000 positive cases of the coronavirus as of Saturday and more than a quarter had come over the last two weeks.

As of Monday, Alabama now has more than 30,000 cases of COVID-19 and there seems to be no end in sight for the outbreak. If the pandemic wipes out the college football season, in the interest of public safety, the economic fallout could last for years.