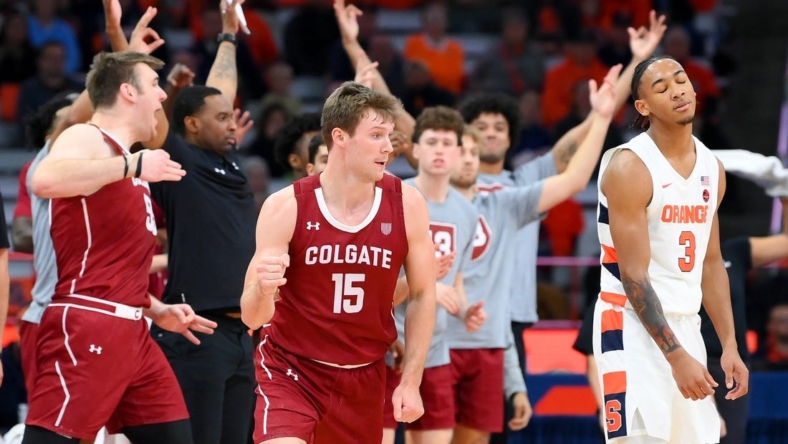 Tucker Richardson made seven 3-pointers en route to a career-high 27 points Tuesday as Colgate won at Syracuse for the second straight year, cruising to an 80-68 victory.

The Raiders (3-1) snapped a 54-game losing streak to the Orange (1-1) with last season’s 100-85 triumph and were just as dominant in this one. They made 19 3-pointers in denying Syracuse coach Jim Boeheim his 1,000th career victory (not factoring in 101 wins that were previously vacated by the NCAA).

Judah Mintz led the Orange with 20 points, while Benny Williams pitched in 17 and Joe Girard had 14. Jesse Edwards notched 10 points, seven rebounds and five blocks in a losing effort.

Colgate led 18-16 midway through the first half when Lynch-Daniels and Chandler Baker knocked down 3-pointers on consecutive possessions. Shortly thereafter, Baker and Richardson each drained a 3-pointer to create a 30-18 advantage.

The Orange got back within 35-27, but Richardson made three 3-pointers in a two-minute stretch as the lead swelled to 44-27.

After leading by 14 at halftime, Colgate increased its lead to 18 on Richardson’s 3-pointer with 14:18 remaining. The Orange later got the deficit back to 11 before Moffatt’s trey extended the edge to 62-48.

Mintz’s bucket made it a 12-point game with 7:23 to go, although back-to-back 3-pointers by Lynch-Daniels and Braeden Smith temporarily restored order.

Syracuse’s final push came when Edwards’ dunk with 2:11 left punctuated a 7-0 run by the hosts. However, Richardson knocked down his seventh 3-pointer to end any hopes of a late comeback.