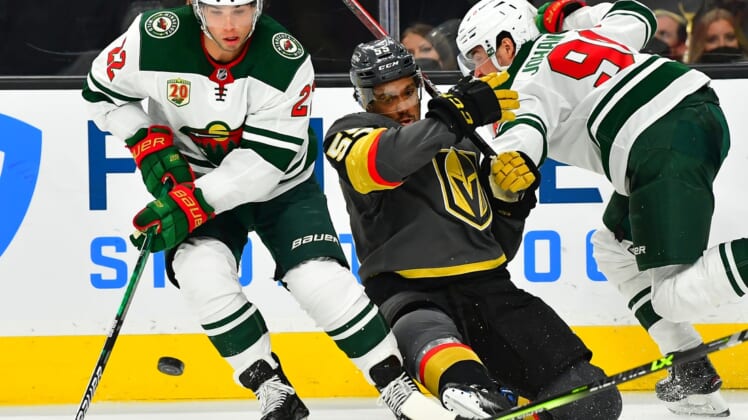 Marc-Andre Fleury made 34 saves and Alex Tuch scored two goals as the Vegas Golden Knights beat the Minnesota Wild 3-1 on Tuesday night in Las Vegas to even their best-of-seven first-round playoff series at a game apiece.

Jonathan Marchessault also scored for Vegas, which improved to 4-0 all-time in Game 2’s after losing the first game of a playoff. The series now shifts to Saint Paul, Minn., for Game 3 on Thursday night. Vegas has never won a regulation game there.

Game 2 was the 82nd career playoff victory for Fleury and the third career two-goal playoff game for Tuch.

Minnesota took a 1-0 lead at the 12:07 mark of the second period on Dumba’s fourth career playoff goal. His shot from the right point went past Marcus Foligno’s screen and over Fleury’s right shoulder.

But Vegas came right back 18 seconds later to tie it when Marchessault rushed in on the right wing and ripped a wrist shot from the middle of the right circle off the crossbar.

The Golden Knights then took their first lead of the series five minutes later, when Tuch, alone in the slot, slapped in a backhand feed from Mattias Janmark behind the net.

Minnesota had a chance to tie it early in the third period, but Victor Rask’s close-in shot from the left side of the goal at the end of a 2-on-1 with Kevin Fiala caromed off the crossbar. 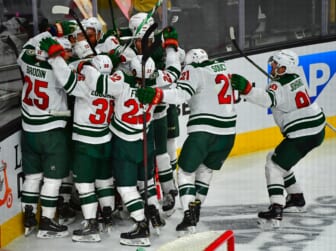 Talbot was pulled for an extra attacker with 1:53 left, but Kirill Kaprizov was called for a tripping penalty 23 seconds later, which brought Talbot back on the ice. Tuch then sealed it with a power-play goal with 53 seconds left, off a pass from Chandler Stephenson.

Vegas played without leading goal scorer Max Pacioretty, who missed his eighth straight game with an undisclosed injury. The Golden Knights also lost forward Tomas Nosek midway through the first period after a hard shoulder-to-shoulder check in the neutral zone with Foligno.