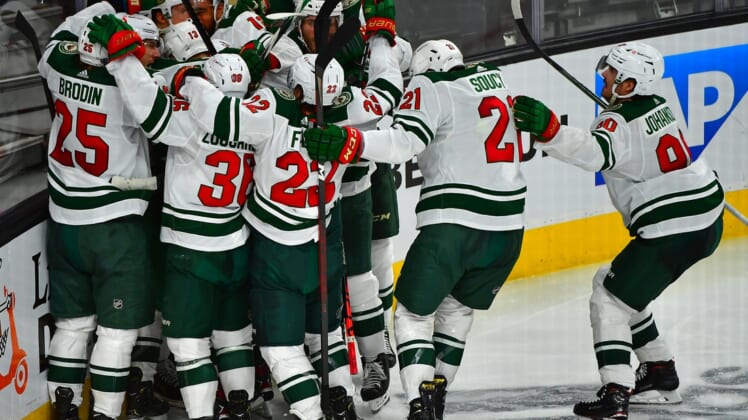 Joel Eriksson Ek scored 3:20 into overtime to lift the Minnesota Wild to a 1-0 win against the Vegas Golden Knights in Game 1 of their first-round, best-of-seven Stanley Cup playoff series on Sunday afternoon in Las Vegas.

Teammate Jordan Greenway handled the puck behind the Vegas net and passed it to the slot, off Marcus Foligno’s stick and to Eriksson Ek. His wrist shot deflected off Golden Knights defenseman Alec Martinez and into the net.

Cam Talbot made 42 saves for the Wild, who finished third in the West Division. Talbot has five postseason shutouts in his NHL career.

Marc-Andre Fleury made 29 saves for Vegas, which finished second in the West.\

Fleury was trying for his 16th postseason shutout, which would have moved him into a tie for third with Curtis Joseph on the all-time NHL list.

Game 2 is on Tuesday night in Las Vegas.

Vegas dominated the offensive end in the first period, outshooting the Wild 19-5. William Karlsson hit the crossbar on the second power play for the Golden Knights.

Minnesota also blocked 11 shots in the first period, and both teams combined for 48 hits.

The shots evened up in the second period, but the game remained scoreless.

Fleury made two of his best saves in the third period on two of Minnesota’s best scorers.

He stopped Wild leading scorer Kirill Kaprizov from in close with just over 15 minutes remaining to keep the game scoreless.

With just over eight minutes left, Fleury deflected a shot from 20-goal scorer Kevin Fiala over the net with his glove.

The Golden Knights killed a power play early in overtime, just before allowing the game-winner.

The Golden Knights played without Max Pacioretty, their second-leading point scorer during the regular season, who sat out with an undisclosed injury.

The Wild and Jordan Greenway set franchise records for hits. The Wild had 71 and Greenway finished with 11.