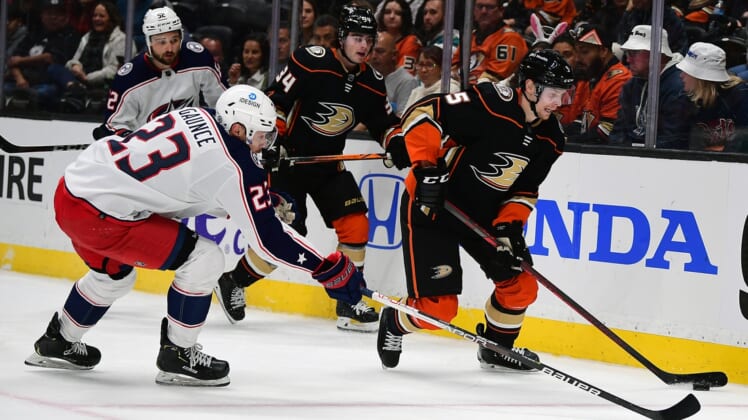 Troy Terry scored twice and Derek Grant tallied once in three-point games to lead the host Anaheim Ducks past the Columbus Blue Jackets 6-4 on Sunday.

Trevor Zegras, Gerry Mayhew and Cam Fowler all collected one goal and one assist for the Ducks (30-33-14, 74 points). Goaltender John Gibson made 31 saves.

With the score tied 3-3 through two periods, Zegras notched his 21st of the season 63 seconds into the third period by finishing a cross-ice pass from Derek. Zegras has 57 points, equal to the rookie mark set by Bobby Ryan in 2008-09.

Fowler scored the eventual game-winner at 3:28 of the frame when he floated a long shot for his ninth of the season.

Sillinger made it a one-goal game at 7:22 of the period by making the most of his own rebound chance for his 14th of the season, but Grant’s empty-net goal rounded out the scoring.

Terry gave the hosts the early jolt by opening the scoring 3:17 into the clash. Ryan Getzlaf intercepted a clearing attempt and fed Terry for the one-timer from the left face-off dot.

Bean replied 50 seconds later. The defenseman was the trailer on a rush, gained the puck at the offensive blue line and buried his shot.

Terry netted his second of the game, and 36th of the season, 96 seconds after that. A broken play resulted in a wide-open chance, and he converted a rebound.

Then, Mayhew made it a 3-1 game at the 7:42 mark. During a flurry of action, Zegras sent a pass to the slot, and Mayhew redirected it for his ninth of the season.

The Blue Jackets drew even in the second period. Bean notched his second of the game, and seventh of the season, 94 seconds into the period when he found the mark from the top of the left circle.

Kuraly’s 14th of the season evened the affair just past the midway point of the frame. Justin Danforth forced a turnover as the Ducks tried to leave the zone, and Eric Robinson set up Kuraly’s tap-in tally.