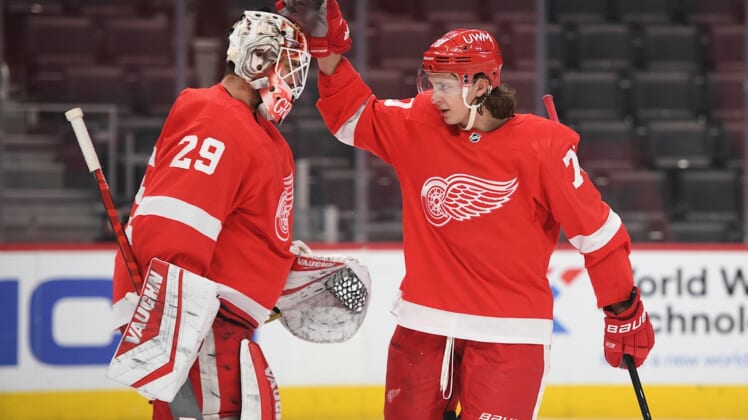 Troy Stecher notched the first two-goal game of his career, Jakub Vrana scored in his Detroit debut and the host Red Wings topped the Chicago Blackhawks 4-1 on Thursday.

Vrana was acquired from the Washington Capitals at the trade deadline on Monday. Michael Rasmussen also scored for the Red Wings, and Marc Staal had two assists.

Thomas Greiss made 24 saves for Detroit, which extended its winning streak to three games.

The Reds Wings defeated Chicago for just the second time in seven meetings. The teams will play their season series finale on Saturday.

Duncan Keith scored for the Blackhawks, and Kevin Lankinen made 24 saves.

Chicago took a 1-0 lead in the first period when Keith, who clanged a shot off the goalpost six minutes earlier, scored for the second consecutive game.

Alex DeBrincat set it up with a pass across the slot to Keith, who was open at the left circle. He fired in a shot before Greiss could recover at 14:47. Dylan Strome collected the second assist on Keith’s third goal of the season.

In a four-on-four situation, the Red Wings tied it up at 4:49 of the second period. Stecher collected the puck at center ice, moved into the Blackhawks’ zone and took a shot from the point. It deflected off a defender, then rolled up Lankinen’s right arm and into the net. Stecher’s first goal of the game was assisted by Staal and Luke Glendening.

Vrana served a too-many-men-on-the-ice penalty later in the middle period and wound up with a breakaway as exited the box. Gustav Lindstrom passed the puck out of his zone to Vrana, who slipped the puck under Lankinen’s right pad at 8:55.

Stecher’s second goal of the game and third of the season made it 3-1 at 11:15 of the second. He was aided by his backline partner Danny DeKeyser, who found Stecher cutting toward the net. Stecher backhanded the puck beyond the prone Lankinen. Vladislav Namestnikov had the second assist.

Rasmussen clinched the Red Wings’ victory with an empty-net goal with 1:25 remaining in the game. Adam Erne assisted on Rasmussen’s third goal of the season.