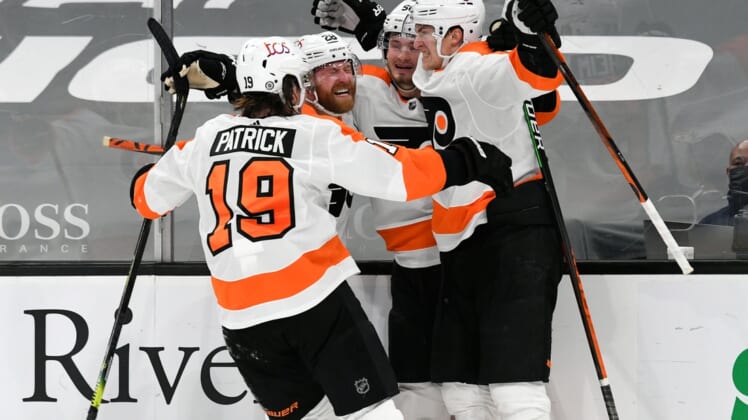 Travis Sanheim scored 3:08 into overtime as the Philadelphia Flyers finally figured out Boston, beating the host Bruins 3-2 on Monday night.

Denied on a point-blank chance 53 seconds into the three-on-three session, Sanheim blocked Patrice Bergeron’s long shot, collected the puck and skated in alone on the retreating Boston captain.

But Bergeron fell down at the Boston blue line, allowing the big defenseman to roof home the game-winning goal for his second tally of the season.

Travis Konecny and Sean Couturier scored, Ivan Provorov posted two assists and Brian Elliott (10-5-1) stopped 27 of 29 shots for the Flyers, who won for the first time in six tries (1-3-2) against Boston.

Bergeron’s power-play goal moved him past Rick Middleton and into fourth in all-time Bruins scoring with 899 points. Karson Kuhlman also scored for Boston.

The 6-foot-5 rookie manned the crease for the first time ever against the Flyers and allowed three goals on 32 shots — including a great kick save on Sanheim’s attempt to start overtime — but fell to 2-1-1.

After falling behind by two goals in Saturday’s shootout loss to the New York Islanders, Philadelphia played from out front in the opening period at TD Garden by grabbing a 1-0 lead at 10:15.

Provorov’s long point shot was deflected in the slot, and the ensuing carom landed on Konecny’s stick in front of Boston’s open cage. He then potted his eighth goal to put the visitors up.

However, the Bruins tied it after a nice pinch by defenseman Jakub Zboril along the wall led to a turnover. Kuhlman wristed his second goal of the year on Elliott’s glove side at 17:33.

On a power play that carried over into the second period, David Pastrnak found Bergeron cruising alone through the slot in the first minute and sent a slap pass that the Boston captain redirected in for his 12th goal.

During Philadelphia’s third power play, Couturier skated in and sent a sharp wrister in at 6:56 of the third to knot the contest at 2 and eventually send it to overtime.

On Tuesday night in Philadelphia, the clubs meet again to finish up the back-to-back set.