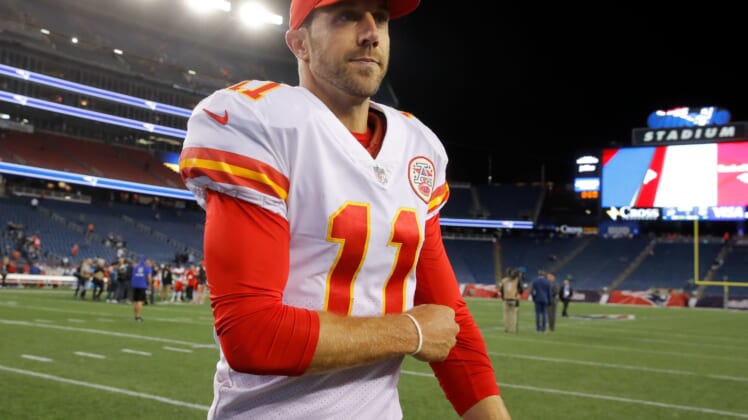 Alex Smith was on fire Thursday night against the New England Patriots, and rookie running back Kareem was unstoppable in his NFL debut. Kansas City Chiefs tight end Travis Kelce thinks the Pats might have been the victim of their own lack of respect for both players.

“I’m not sure what it was (that led to the offensive success of the Chiefs),” Kelce said after the game, per Tom E. Curran of CSNNE.com. “It might have been the lack of respect they had for Alex’s arm, the lack of respect for our running back. The defense that they were presenting, I thought they would have gone a different way. We went out there and we executed given what they presented and we came out with a win.”

It’s easy to see why New England may have not respected Smith’s arm. He’s long been known as one of the best game managers in the league, but nobody’s ever accused him of being a deep-ball genius.

It’s also easy to see why the Pats might have thought Hunt wasn’t anything special after he fumbled away his first NFL carry. At that point, it looked like New England would go up 14-0 and run away with the game. Instead, Kansas City’s defense put up an outstanding stand and repelled a fourth-down attempt in the red zone.

Then Smith engineered a 12-play, 90-yard drive to tie the game up at 7-7, and suddenly the Chiefs were in the game. From there, Smith ended up throwing two touchdown passes of 75 yards or longer (watch here and here, finishing with 368 yards and four touchdown passes in the game. Hunt, who caught one of those scores, posted an NFL record 246 yards in his first ever start and scored three times.

Nobody expected the Chiefs to blow out New England. But in the end they walked out of Gillette stadium with a 42-27 lead, making an early statement to the rest of the AFC — disrespect our offense at your own peril.