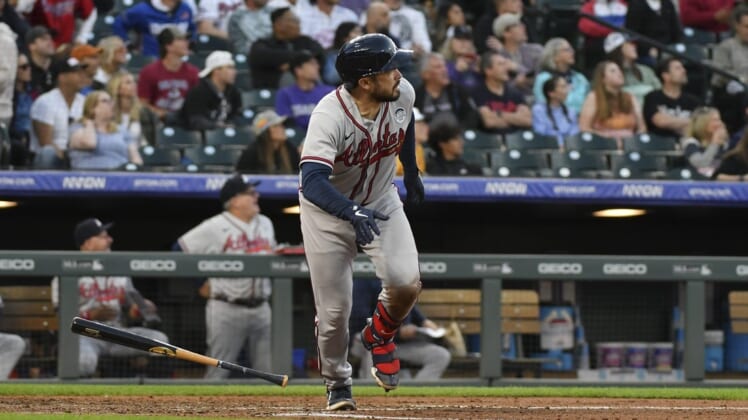 Travis d’Arnaud hit a pair of home runs, including a grand slam, and drove in a career-high six runs to help the visiting Atlanta Braves defeat the Colorado Rockies 13-6 on Thursday in the opener of a four-game series in Denver.

D’Arnaud went 3-for-5 and scored three times. He hit a two-run homer in the third inning and hammered a 392-foot home run with the bases loaded in the fifth. It was d’Arnaud’s second career grand slam and the first of the year by an Atlanta player.

The Rockies had 13 hits, four of them from Charlie Blackmon and two from Connor Joe, who also walked twice and extended his on-base streak to 29 games. Brendan Rodgers (20 games) and Jose Iglesias (13 games) extended hitting streaks.

Atlanta starter Ian Anderson (4-3) broke a two-game losing streak. He pitched six innings and allowed five runs on 10 hits and one walk. He matched his career high with nine strikeouts.

Gomber (2-6) took his fourth straight loss. He gave up nine runs on 10 hits and two walks in five innings. He struck out five.

The Rockies got a run in the first inning on Blackmon’s RBI single.

The Braves answered with three runs in the second inning, a rally that started with two outs. Guillermo Heredia tripled off the wall to drive in a run, then scored on an infield single by Harris. Dansby Swanson drove in Harris with a single.

D’Arnaud’s two home runs gave Atlanta a 9-1 lead, but the Rockies got three back in the fifth — on Blackmon’s RBI single and a two-run homer for C.J. Cron.

Atlanta responded with three runs in the sixth — on doubles by Swanson and Riley and a single by Matt Olson.

Colorado’s Garrett Hampson hit a solo homer in the sixth.