Travis d’Arnaud drives in 3 in Braves’ win over Mets 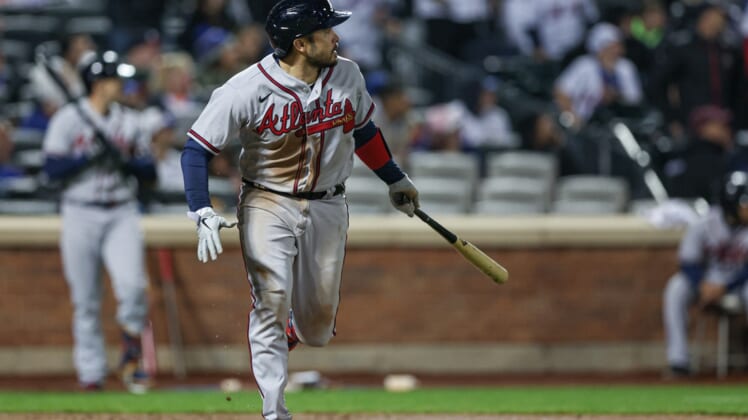 Travis d’Arnaud continued to torment his former team Monday night, when the Atlanta Braves catcher had three hits and three RBIs in a 5-2 win over the host New York Mets in the opener of a four-game series.

The Braves snapped a two-game losing streak and pulled within five games of the National League East-leading Mets, who have won a franchise-record seven straight series to open the season.

D’Arnaud, who played for the Mets from 2013 until early in the 2019 season, singled in the second for the Braves’ first hit off Chris Bassitt (3-2) and popped out in the fourth before he tied the game at 2-2 in the sixth by flicking an opposite field RBI double just fair down the first base line.

Ozzie Albies, who went to third on the double, scored the go-ahead run on Adam Duvall’s sacrifice fly. D’Arnaud was thrown out trying to advance to third for the final out of the inning, but he redeemed himself with an insurance two-run, two-out double to left field in the eighth.

Another Mets tormentor, Austin Riley, homered in the fourth for the Braves’ first run. Riley has 12 homers against New York, his most against any opponent.

Max Fried (3-2) earned the win after allowing two runs on four hits and no walks with six strikeouts over six innings. The Mets loaded the bases with two outs in the seventh against Tyler Matzek, but Collin McHugh struck out Mark Canha before A.J. Minter threw a perfect eighth inning. Kenley Jansen worked around a one-out single by Starling Marte in the ninth to earn his seventh save.

The Mets took a 2-0 lead with single runs in the second, when Marte doubled, took third on a fly out and scored on a wild pitch, and third, when Canha homered.

Bassitt allowed three runs on six hits and one walk while striking out eight over seven innings.