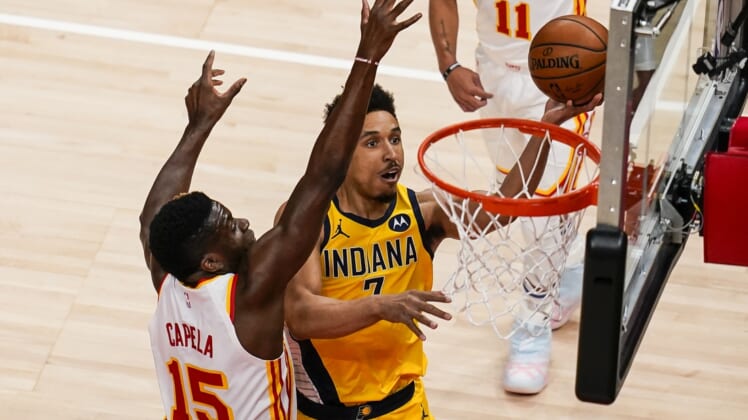 Trae Young collected 34 points and 11 assists and the Atlanta Hawks used a fast finish to secure a 129-117 win over the visiting Indiana Pacers on Sunday afternoon.

Clint Capela recorded 25 points and 24 rebounds and Kevin Huerter and Bogdan Bogdanovic each had 23 points for the Hawks, who have won eight of their last 10 games.

Indiana received 29 points and eight assists from Malcolm Brogdon and 18 points and 15 rebounds from Domantas Sabonis. T.J. McConnell came off the bench to score 18 points.

The Pacers, who trailed by as many as 20 points, tied it at 105 on a basket by Sabonis with 5:09 remaining. The teams each had a bucket before the Hawks went on a 13-4 run, sparked by 3-pointers from Huerter, Bogdanovic and Young.

Atlanta shot 40.6 percent from 3-point range, with Bogdanovic and Huerter each making five from beyond the arc.

The Hawks, who shot 56.5 percent in the first half, bolted to a 30-10 lead and were leading 35-27 after one quarter. Indiana’s second unit helped cut the margin to 46-43 with 5:07 remaining on a floater from Jeremy Lamb, but the Hawks rebuilt the lead thanks to some good 3-point shooting — back-to-back treys from Huerter inside the last minute — and led 66-57 at halftime.

The Pacers got as close as one point when McConnell’s basket cut the lead to 87-86 with 2:21 left, but they could never take the lead. Atlanta took a 94-90 lead into the fourth quarter.

The Pacers play the San Antonio Spurs on Monday to open a three-game homestand. Atlanta plays again on Tuesday when it hosts the Orlando Magic.